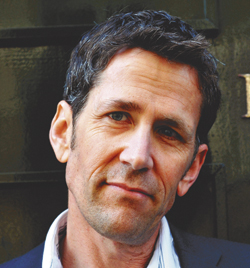 With two successful seasons under its belt—both of which received an enthusiastic response from the community—the Deschutes Public Library Foundation announce the line-up for its 2014-15 Author! Author! literary series. September 25 kicks-off with Jess Walter, author of Beautiful Ruins.

•    JESS WALTER Thursday, September 25, 2014 | 7pm | Bend High School Auditorium
New York Times-bestselling author of Beautiful Ruins. Walter is the author of eight books and a career journalist whose work has appeared in the New York Times, Washington Post and Boston Globe. He was awarded the PEN/USA Literary Prize in both fiction and nonfiction. Walter will also lead a writing workshop on September 26; it is open to the public but registration is required and space is limited.

•    GARTH STEIN Wednesday, February 11, 2015 | 7pm | Bend High School Auditorium
Stein’s novel The Art of Racing in the Rain sold more than six million copies, has been translated into 35 languages and spent more than three years on the New York Times bestseller list. His new novel, A Sudden Light, will be published by Simon & Schuster in September.

•    ANN PATCHETT Friday, March 6, 2015 | 7pm | Bend High School Auditorium
Patchett is the best-selling author of the novels Run, The Patron Saint of Liars, Taft, State of Wonder and The Magician’s Assistant. She received the Orange Prize for Fiction and the PEN/Faulkner Award in 2002 for her novel Bel Canto. She is also the author of five non-fiction books, including her most recent memoir, This Is the Story of a Happy Marriage.

•    PIPER KERMAN Friday, May 29, 2015 | 7pm | Bend High School Auditorium
Kerman is the author of the memoir Orange is the New Black: My Year in a Woman’s Prison. The book has been adapted into a Peabody Award-winning original series for Netflix. Kerman serves on the board of the Woman’s Prison Association and is a frequently invited speaker to students of law, criminology, gender and women’s studies, sociology and creative writing. She received the 2014 Justice Trailblazer Award from the John Jay College Center on Media, Crime and Justice.

“We’ve been so pleased by the community’s embrace of the series,” says Author! Author! Project Director Chantal Strobel. “Their enthusiasm shows that Deschutes County is a vital hub in Oregon’s cultural and literary landscape.”

Strobel says that the series’ success benefits the community in a number of ways. “Author! Author! promotes and strengthens community dialogue. We saw this so clearly last season, especially with authors such as Sherman Alexie and Cheryl Strayed. But the program also helps out libraries at the same time,” she adds. “All of the proceeds from ticket sales are used by the Foundation to support and enhance Library programs and services.”

In an effort to increase exposure to literature and engage teens in civic dialogue, the Library Foundation also provides free tickets for up to 200 regional high school students to attend the four author presentations and to receive copies of the authors’ books.

“The Library Foundation works closely with high schools in our area to provide books for students to read prior to each author’s visit,” Strobel says. “This is part of an effort to reach out to young adults in the region and to expose them to quality literature while engaging them in discussions regarding the books’ themes.”

General admission tickets are just $20 each. Those tickets, as well as preferred seating tickets that include access to a private author reception, are available now at www.dplfoundation.org. Series tickets are also available.