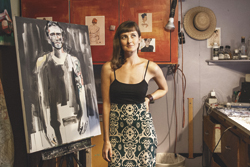 Colorado native Sheila Dunn grew up as an inquisitive dreamer; a childhood spent dancing and reading helped nurture the rich creative passion that began to emerge on canvas years later. Her work is heavy with color and exploration into the deeper realms of self, a combination resulting in gorgeous portraits of influential individuals in her life.

While at college at Colorado State, Dunn received a Bachelors of Fine Art in painting with a minor in art history, however her pivotal educational experience came during a study abroad semester in Italy.

“That was a real turning point in my art,” she explained. “Before that I wasn’t sure why I was pursuing art, was it the responsible decision? That experience really solidified that art is not a luxury; it is vital to our growth and progress as human beings. That was a really profound experience for me.”

Dunn experimented with many different styles over the years, but recently found a strong voice that has resonated with her. “My style has most notably changed in the past few years,” Dunn said. Recently turning 30, moving to Oregon from her home state of Colorado and getting out of a serious relationship has all led her to meditate on transitions. 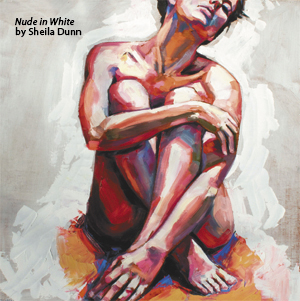 “We go through these transitions, it’s kind of like falling apart, and [those times are] sometimes really vulnerable and scary; you feel exposed,” she explained. “The raw openness can feel kind of overwhelming, [but] if you are willing to stay open during those transition periods, it can be so productive creatively. As an artist or painter, those periods have resulted in some of my best work.”

Dunn reaches deep into the idea of self in her work, exploring the idea of integration and disintegration. “I’m very intentional about the way I apply paint. My brush strokes [are like a] fractal, breaking down an energy or form into smaller and smaller parts, and I always intentionally leave some of the background showing through the figure. I’m trying to represent the idea that everything we experience becomes a part of us. There is not a lot of separation there.”

While she has been exploring the imagery of energy breaking down into smaller and smaller parts since college, it has recently transitioned from being an element she explored in the background of her work as pattern or texture, but now is translated into the figure itself.

Women are represented frequently in her current paintings, and the figures speak to the strength of the feminine. “It had a lot to do with my mom; I was raised by a strong female figure,” Dunn explained. “I am learning to embrace the feminine qualities of vulnerability, tenderness and empathy, that’s really where the strength lies in a lot of ways.

“My models are incredible, gifted strong women [in my life] who maintain that softness to the world…you can be strong and still maintain a level of sensitivity, that’s what I was trying to explore [in the current series].”

Dunn’s paintings are poetic explorations, but she mentioned her chosen medium could have easily been music or words. “I feel like there is this point in life where I chose the painting direction, but I could have just as easily chosen music or writing. It’s just where I’m focusing now…I never want to stop creating, and maybe will focus on writing one day.” 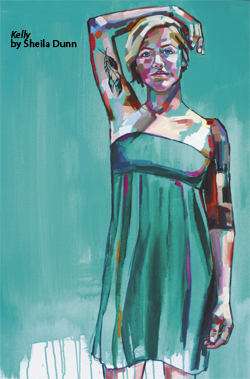 She keeps an eloquent blog (http://sheiladunnart.com/recent-words) on her website that is a testament to her love of language and she explained that music has become an essential component in her creative process.

“If I couldn’t paint with music, I don’t know if I would be a painter,” she said. “I love music so much, it really inspires.” To explain, she mentioned musician Jolie Holland’s thoughts on the matter: after absorbing poems and music over time…all the material will eventually spill out as songs. “I’m continuing to absorb the songs or writings that speak to me,” Dunn said. “I feel like there are certain paintings that just come out of this process.

“The artist Michelangelo said that [when working he knew] the sculpture was already in the stone and it was his job to release it from the block. That is my experience with painting. Occasionally it will be like channeling or releasing this painting.”

In her next series Dunn plans to push more on the idea of the figure integrating with the background. “I feel like the last few years I’ve been trying so much to loosen up and I remember one of my professors said, ‘Get back to that spontaneity that you had as a child.’ I’m really excited for my next series as I want to keep pushing with ideas, figures and background.”

Dunn explains her art has been well received in Central Oregon, but she is working on scheduling some shows in Seattle and Portland next spring. “I’m at a point in my work and career where I need a broader audience,” she said.

“I’m really excited about my art,” Dunn said. “I have worked really consistently, I paint every day. I have taken that discipline, my style has come together and I can make a living doing that and it feels really good to finally be at that point.”

Dunn has shown her art around Bend at Thump, Sparrow Bakery, Hot Box Betty, St. Charles Hospital, Velvet and a few yoga studios; she has upcoming exhibits at North Soles in November and December, DOJO in February and Velvet in March.

“Sometimes it’s hard to find space because I work in a larger format. My stuff is maybe pushing the boundaries in Bend, so I haven’t been able to show at a few places. In a way  I’ve been okay with that because a professor of mine once said, as an artist the worst thing is to have something and have people be indifferent [towards it], any strong response is good.”