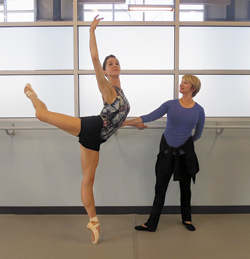 Not everyone cares about ballet. But there is a certain and special psyche that is drawn to its mysteries and meaning, whether as an audience member or a practicing dancer. Until a person has the chance to see the power of this dance form worthily performed, it can remain irrelevant, regarded as a quaint and fading remnant of old Europe reserved for the imaginations of little girls playing princess. Commentary by Joy Victor

At age six I was introduced to my first class, but only remember my fascination with our drill on how to use the fire escape ladder. Later at age eight came another story. Once I experienced a life-changing performance of the great Bolshoi Ballet from Moscow I was marked with a life-long passion, culminating with the thrill of being a member of American Ballet Theatre in New York City, dancing onstage with legendary artists such as Mikhail Baryshnikov and Natalia Makarova.

Ballet expresses a nobility, an aspiration of the human spirit that no other dance form seems to be able to do. The famous ballet artists from 1850 until today, who attained an almost divine level of expression from the stage, communicated a bliss and wondrous rapture that has captured the hearts of lovers of beauty and grace, and also the most unlikely of victims.

Note the surprising reaction of a hardened war correspondent Harrison Salisbury who witnessed prolonged horror of battles in World War II and then – found himself sitting at the Bolshoi Theater in Moscow watching the unmatched Galina Ulanova perform the ballet Giselle.

”I was a war correspondent then, knew nothing of ballet and rather turned up my nose at it. The performance in 1950 was the first during my stay in Moscow. After seeing Ulanova that night I tried to record what I felt.  I wrote:

“How can I put a dream down on paper? How can I make you feel a moonbeam and touch the gossamer wing of a fairy? Where are the words that will make an angel come to life, a star glitter in your hand and a wisp of rainbow shine in your hair?

“It is the most thrilling and beautiful thing I have ever seen. Don’t expect this to make sense. I’m still at the Bolshoi last night watching the fairy princess of the whole world

and all her assistant princesses float over the stage, toes twinkling like stars and bodies fluttering like humming-bird’s wings. Foolish people talk about the seven wonders of the world. THIS is the wonder of the world.”  (Harrison Salisbury  1953)

A large photograph of Ulanova radiates this presence in the coffee lounge of our new school.

This is the magic of true ballet, the heights to which it soars and then affects human hearts forever. This is the glimmer that draws little ones to its beauty, an expression of purity in a world gone mad. This is an oasis of peace and perfection of grace that gives a weighty sense of rightness to our search for meaning and goodness in the world. This is why I love ballet. And this is why I want to keep it alive and well for those who seek it out whether young or old.

There are those who train in ballet seeking for the elusive and difficult professional career. Then there are others who dance to enjoy the thrill of this near-otherwordly art, creating  forms and gestures that draw out the imagination to ageless ideals and genteel graces.

The influence even on very small children remains as a memory like a blessed island apart from the rush and press of growing up into the adult world of work and competitive achievement. You can recall  moments where you saw and felt in ways that you cannot see and feel today. The effects of timeless music and creative movement in a loving atmosphere held in the memories of young children can cause a life to be guided by a higher source, an angel voice of aspiration whose whisper never fades.

Like a vein of gold rising from deep rocky places, ballet comes from the charm, the royal beginnings, of the sincere desire of kings and potentates to make the world a better place. Ballet will continue to do this as long as it is understood and guarded for the high art that it is, taught with true knowledge and respect for its origins. Combining its discipline with a contemporary outlook and appeal is the not-so-new challenge of the great professional ballet companies of the world.

Giving special motivation to thrill and enliven students in the long term is the greater thing, greater than just imparting ballet technique.   Ballet being one of the means to an enriched life makes the opening of Victor School of Performing Arts very exciting for me, seeing what new adventures of inspiration may come. We aim to project our vision far beyond Oregon to countries of the world to enact a cultural exchange of students, art and friendship.

Joy Victor is the director of Victor School of Performing Arts International, a new school in Bend.