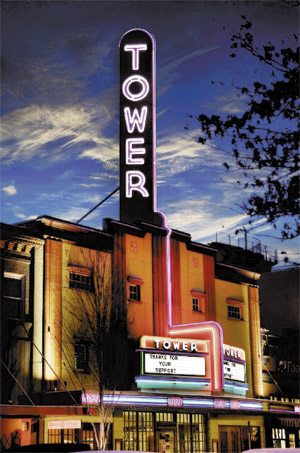 The Tower Theatre is celebrating the 10 years since the renovation of the iconic Bend building, but more influential than the new paint, carpet, stage and chairs of 2004 lies the achievement of their original mission: to provide a wide variety of programming for every demographic, support local organizations and develop a youth educational program. Story by Renee Patrick

“I am extremely pleased with how well the Tower has met my dreams and expectations in the first 10 years since its reopening!” commented original Foundation Board Member Clella Thomas. “It has enriched the lives of a broad mix of Central Oregonians and attracted tourists as well. There is nothing ‘elitist’ about the Tower. It is a very welcoming place for all…When the lights are on at the Tower, downtown Bend seems to come alive.”

“The building turned out terrific,” said Win Francis, an early owner of the Theatre, “It’s certainly been used a lot, that is wonderful. The idea of having a full range of use to benefit the community, and bring people downtown has been a great anchor for downtown in the evening.”

There is no doubt that the Tower has acted as an anchor for downtown Bend; restaurants, shops and bars benefit greatly from the increased traffic Tower shows bring. It can be difficult to quantify how much the Tower Theatre has impacted Bend in the past 10 years, but using an economic impact calculator developed by Americans for the Arts reveals that just in the 2013-14 season the Theatre is poised to contribute over $2 million dollars to our economy.

As for paving the way for other local arts and cultural programming to thrive, Thomas shares, “The Tower has played a key role in the increased interest in and availability of cultural and performing arts activities in Bend. I have seen tremendous growth in our community’s support and demand for more arts and educational opportunities…The numerous performances the Tower has brought to Bend over the last 10 years has made us hungrier for more.”

The Tower Theatre has taken a leadership roll in the arts community in both the formation of the Arts & Culture Alliance, which strives to foster collaboration between Central Oregon’s arts organizations, and the formation of the new Bend Cultural Tourism Fund which will create a public fund dedicated to promoting arts and cultural programs in Bend.

To commemorate the successful community effort to renovate the Tower Theatre 10 years ago, Executive Director Ray Solley has lots of ideas brewing. “We want to draw attention to the fact that the building hasn’t always been like this. It was a decision by the City Council and by the stakeholders who said we are going to save the building and turn it into a performing arts center…We also want to share with people a lot of our milestones.”

Solley and the Foundation’s board of directors have also committed to providing a wide variety of programming in 2014 with hopes to mix and match a wide variety of people. “The guitar festival in January will feature professional guitar players from around the world,” Solley said. “They will be doing professional concerts and workshops at the schools and on the stage and different groups of students will be performing as opening acts for these performers.

“We are trying to underscore the fact that the Tower is an accessible venue for everybody in Central Oregon as well as a showcase for pretty much any kind of performer around the world…January 30 is the last night of our Bend Guitar Blast, and four guitarists from around the world will be capping off our festival on the Tower’s anniversary.”

Keep your ears open for further information about celebrations, there will be a birthday cake, a sing-a-long to Grease in March and Solley shared tentative plans of a New Year’s Eve bash that will propel the Tower into their next anniversary in 2015…75 years.

A Founders party is in the works for February which will celebrate all the people that were involved with the renovation, board members, renovation committees and community members.

“We would love to thank each and every person individually that has purchased a ticket to an event, and to thank our loyal and dedicated members, and of course honor those who have contributed money to keep our venue thriving,” said Foundation Board President Bob Singer. “Without all of those, we would never be able to accomplish our key mission, that of providing arts and entertainment to the youth of the Central Oregon.”