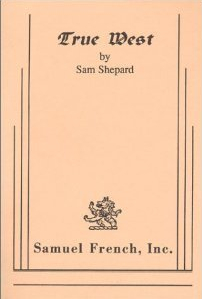 Admission is $3. VTP is located in Bend’s Century Center at 70 SW Century Drive (14th St.) next to GoodLife Brewing.

True West involves two estranged brothers reconnecting in their Mother’s (who is on vacation in Alaska) Los Angeles home after years of separation. Austin (Derek Sitter) is a Hollywood screenwriter who is married with kids and has retreated from Northern California to his childhood home to finalize his latest script with Saul, a Hollywood producer.

Lee (Wayne Newcome) is a drifter, having spent most of his recent years in the Central Valley and deserts of California, and has just popped in unannounced. The sibling rivalry escalates when Lee convinces Saul to produce his story instead of Austin’s. The two brothers then spend most of the night drinking, fighting, and ransacking, while trying to write the outline for Lee’s story.

The long intense night becomes morning and with it, Mom’s early arrival from Alaska as she’s convinced that Picasso is in town. The startling ending proves that behind all the glitz and glamour of Hollywood are the brutal realities of family dysfunction, which are indeed the true West.

Sam Shepard is an American playwright, actor, and television and film director. He is the author of several books of short stories, essays, and memoirs, and received the Pulitzer Prize for Drama in 1979 for his play Buried Child. Shepard was nominated for an Academy Award for Best Supporting Actor for his portrayal of pilot Chuck Yeager in The Right Stuff (1983). Shepard received the PEN/Laura Pels International Foundation for Theater Award as a master American dramatist in 2009.

Volcanic Theatre Pub is committed to enhancing Central Oregon’s cultural environment by providing a unique artistic venue and making an essential contribution to the High Desert community. Our respect for artistic expression holds us to the highest standards possible, presenting plays that will challenge you with relevant material, acting that will astonish you, films that will shake you, and music that will move you. All of this in one cozy intimate black box warehouse furnished with comfortable sofas, recliners, tables, chairs, and bar tops, and equipped with state of the art projection and sound, while serving many of the best local and regional beers and wine.

True West premiered on Broadway in 1982 at the Cherry Lane Theatre, with the then unknown actors of The Steppenwolf Theatre Company, John Malkovich and Gary Sinise, where it ran for 762 performances.

In 2000, Philip Seymour Hoffman and John C. Reilly recreated the lead roles on Broadway, where they switched parts every so often during the run. They solicited to share a single joint Tony Award nomination for Best Actor in a Play for the production, but were instead each nominated individually. This revival was also nominated for Best Play and Best Director (Matthew Warchus).