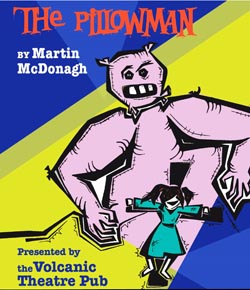 Thursday-Saturday October 16-18 and 23-25 at 7:30pm head to the Volcanic Theatre Pub for a 2003 black comedy that won the 2004 Laurence Olivier Award for Best New Play and was nominated for the 2005 Tony Award for Best Play.

Set in an unnamed police state Pillowman tells the story of a Brothers Grimm style writer being interrogated by two detectives about his gruesome tales and their possible linkage to several recent child murders. Things take an enormous twist when Katurian’s mentally-handicapped older brother is also brought in for questioning.

“This play is essentially about storytelling. It’s about art’s motives and responsibilities, particularly when they are dark in nature. Does violence in storytelling help us have a deeper understanding of the cruelty in humanity or does it simply produce more violence? Should there be limits to the freedom of artists? Or even larger, has freedom of speech reached its limits? McDonagh never answers any of these questions. He leaves it, to quote the play, ‘a puzzle without a solution.’ All I know is that it’s a great story and funny as hell,” states actor and director Derek Sitter.

The Pillowman features actor and director Derek Sitter as Katurian (the writer), Wayne Newcome and Gavin Douglas as the detectives and Don Tompos as Katurian’s older brother Michal.

This is fringe theatre at its best and is not to be missed at your local theatre pub. Experience the realm of humanity.