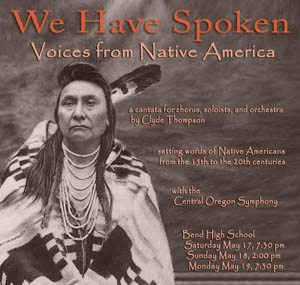 The libretto for the cantata is made up entirely of the words of Native Americans from the 15th to the 20th centuries, and traces the history of North American Indians through those centuries of change and turmoil as their way of life was gradually overwhelmed by white culture.

Originally scored for accompaniment by two pianos and percussion, the cantata received its premiere in 2002. Portions of the work have been performed throughout the United States, including at the opening ceremony of the Smithsonian’s National Museum of the American Indian in Washington D.C.  These concerts with the Central Oregon Symphony will be the premiere of a newly orchestrated version created especially for this collaboration.

Members of the Mastersingers who will appear as soloists in the work are Christian Clark, Katrina Hays, Trish Sewell, Mark Hickman and Steve Osterkamp.

Admission to We Have Spoken is free, but tickets are required, available through the Central Oregon Symphony at www.cosymphony.com