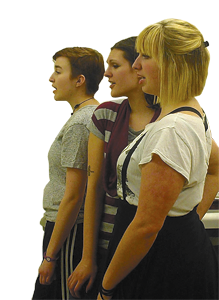 Working opens at 2nd Street Theater February 15 with a champagne reception and runs through March 2.

Working is a vital, newly re-mastered musical based on the book by Pulitzer Prize-winning author Studs Terkel. This re-adaptation by Stephen Schwartz (Wicked, Pippin and Godspell) from the original adaptation by Stephen Schwartz and Nina Faso, Working is the working man’s A Chorus Line. A musical exploration of 26 people from all walks of life, with songs by all-star composers Craig Carnelia, Micki Grant, Tony Award winning Lin-Manuel Miranda, Mary Rodgers, Susan Birkenhead, Stephen Schwartz and Grammy Award winning James Taylor.

Working celebrates everyday people in a genuinely funny and touching way. “I was approached by the producers of Metro Stage Theater Company in Boston, Massachusetts to play a part in a relatively unknown musical for their upcoming season,” says Director David DaCosta. “Being one to never turn down an opportunity when it comes as an invitation, I accepted, not knowing how powerfully inspiring and uplifting experience I was about to encounter.  Working is a musical about people: their lives, their triumphs and tribulations, their hopes and dreams, and a reflection of these things in all of us.”

Unlike traditional “book” musicals, Working is hybrid: part review, part ensemble, part one man show. It tells the stories not just of working people, or the work people do, but of all people and WHY they do the work they do. We all have a connection to this one component of life:  we work. We all come to our “destiny” by fate, by happenstance, by determination, by circumstance, by purpose, by tradition or by mistake. Whatever the means, Working gives audiences a vehicle by which to connect.

Portrayed by some of Bend’s best and brightest performers including Susan Evans Inman (1776, Spitfire Grill), Hector Ariceaga (Evil Dead, Sordid Lives), Karen Sipes (Assassins), Adam Eagle (Sordid Lives, Assassins), among many others.  Directed by David DaCosta and Scott Michaelsen, the team that brought you Asssassins, Working fills you with hope and inspiration and is the perfect musical for everyone who has ever worked a day in their lives.