As BendFilm prepares for the tenth year of the popular indie film festival, posters from previous festivals have been making the Bend ArtWalk rounds over the past few months. September’s event at Cowgirl Cash will feature artwork by BendFilm sponsor, artist and graphic designer Euijin Esther Gray.

“It’s a good way to join the artist community with the film community,” said BendFilm Festival Director Orit Schwartz. “We showed the 10 years of BendFilm posters at North Soles in July and Hot Box Betty in August.”

An official BendFilm ArtWalk on October 4 will usher in the festival (October 10-13) with 10 artists creating 10 window displays to celebrate 10 years of BendFilm. Viewers will cast votes for the best display, and the winning artist will receive a pair of film tickets, a bumper sticker and $100 downtown cash.

“Ester is the one who created the BendFilm logo, and she helped brand the festival in the very beginning,” Schwartz explained. “This year she popped back up into our lives, and has been helping us keep the brand solid. Along with the 10 years of posters at Cowgirl Cash she will have some of her art mixed within.”

Gray returned to the BendFilm team (and Central Oregon) after a number of adventures with her husband, filmmaker Nathan Gray, and their son, Teo. She helped Nathan show two films at BendFilm in the past: Sour (2007) and PUSH Tunisia (2012). 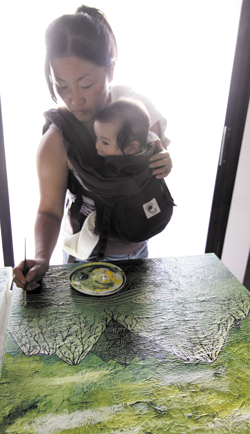 She has always been interested in the creative arts and earned a masters degree in graphic design at Tyler School of Art in Philadelphia. “Even though I was studying design and was on the computer, I still got to interact with designers and we were required to have exhibits. School is when I first started my personal art work, and didn’t explore that professionally until recently,” she commented.

Gray’s primary medium is paint and enjoys exploring colors on canvas or board. “Because I am a graphic designer, it’s a great way to express myself, it is a different creative process,” she explained. “Graphic design is more about teaming up with clients, art is more about what I want to say and there is more freedom.”

She currently has a series of hand-drawn illustrations on Korean handmade paper adhered to raw linen on display at Feather’s Edge Finery. “I’m in a space of not wanting any sort of toxins around, and these feel earthy [to me].”

Gray will be one of the 10 artists putting together a BendFilm window display for the October ArtWalk. Other special events planned for the anniversary include a kickoff party at Deschutes Brewery on September 26 and a “How to BendFilm” on October 1.

“We are thrilled to have hit this benchmark. Thanks to everyone who has supported us over the years,” Schwartz said.