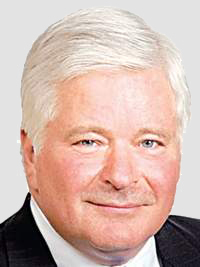 A benefit golf tournament supporting educational programs at The Museum at Warm Springs.

The Museum At Warm Springs annual benefit golf tournament May 19, “The Boomer Classic”, is a tribute to the memory of Jim Noteboom (“Boomer”). The spirited competition between “Boomer” and his great friend, Chief Delvis Heath in tournaments past, is still remembered with smiles. Jim was an early supporter and member of the Board of Directors of The Museum and was President of the Board for several years.

Jim Noteboom was a widely known and respected attorney and community member who practiced law at Karnopp Petersen, LLP for over thirty years. He dedicated his career to representing the Confederated Tribes of the Warm Springs Reservation of Oregon. His work on behalf of the Tribe specialized in energy, water, environment, land acquisition, and natural resource law.

He was the primary attorney involved in the negotiation of the Tribe’s  landmark water settlement agreement with the State of Oregon and the United States. He also represented the Tribe while negotiating the settlement agreement with Portland General Electric Company and the U.S. Department of the Interior under which the Tribe acquired a major ownership interest in the Pelton Hydroelectric Project.

Jim grew up on a farm outside Salem. After completing his B. S. and M.B.A.  at Oregon State University, he entered the Marine Corps in 1968 and served  as an artillery officer in Viet Nam. He returned to law school at the  University of Oregon in 1974 and began his law practice in 1977. In 2002 Jim received a Master of Strategic Studies degree from the U.S. Army War  College. Military service was an important part of Jim Noteboom’s life and  he served a total of 39 years in the Navy, Marine Corps and Army, both on  active duty and in the Reserves. In 1996, Jim began serving as an adjunct  instructor for the Defense Institute of International Legal Studies and led teaching teams to Kyrgyzstan, Georgia, Ethiopia, Congo, Argentina, Zambia, Ukraine, Eritrea, Croatia, Senegal, Ukraine, Zambia and Zimbabwe to provide instruction to host nation military and civilian leadership on a variety of topics. Jim passed away suddenly on November 17, 2008.