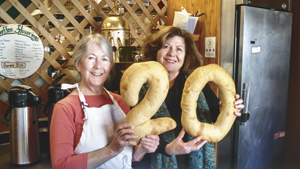 The nostalgic notion of a hometown bakery is alive and well in downtown Sisters, where Sisters Bakery churns out a daily deluge of warm loaves of artisan bread, old-fashioned donuts, cookies, gourmet granola, pies and cakes. Celebrating her 20th anniversary this month, owner Melissa Ward looks back fondly across two decades of savory service to the community. by Jeff Spry

“I bought the business and opened on January 20, 1995,” she said. “Sisters was just 550 residents and there was a lot of wide open space between buildings. It was a quieter town back then. I’d decided I didn’t want to work for someone and needed to own my own business. I was an English major in school. It’s that classic story of someone with no commercial baking experience just diving in and learning on the fly.”

Ward has observed many changes in the business and finds the regular routine much more energetic than it used to be. The volume and range of baked goods has bloomed over the years.

“I kind of let my bakers take the lead and encourage them to explore other types of products. Our selection of donuts has really expanded with pumpkin donuts, applesauce and devil’s food.”

One of Sisters Bakery’s favorites are the magnificent, sugar-glazed apple fritters holding a place of honor in their glass case.

“They’re really good and are made with a lot of apples. I’ve had customers, twin brothers, who came in and claimed to be connoisseurs of apple fritters. I came over and joined their conversation and they gave our fritters very high marks.”

Another of the more popular items on their menu are their prized almond bearclaws, based on a classic European recipe.

“That’s something we sell out of every day and can barely keep up with. And we also make beautiful French croissants.”

The ovens are warm ‘round the clock at their busy Cascade Avenue location, with crews showing up at dawn to get the fresh bread going.

“There’s only about four hours of down time,” Ward said. “The opening baker comes in around 4:45am and they prepare the loaves of cinnamon and jalapeno bread. The person at the counter makes the muffins then proofs and bakes the croissants and the bearclaws and marionberry biscuits. So we start out with a nice fragrance in the store every morning.”

The bakery’s loyal clientele is a huge cross section of local residents, tourists, teens and visitors who love to eat and like an occasional treat. For Ward, this daily interaction with customers and her employees is part of what she likes best.

“I love the people,” she said. “I have a real congenial, interesting, smart staff and the customers are really that way too. It’s a social thing as well as a business transaction. A local bakery is a happiness business and it’s our mission to make people feel that. That’s what we want them to take away.”

Ward is proud of the bakery’s enduring popularity and one of the reasons she wanted to have a 20th anniversary salute with free carrot cake is to show appreciation for her customers.

“It’s remained authentic and it’s always been an unpretentious place where people feel comfortable. Sure, it’s a little too small and a little too crowded but it’s friendly and welcoming and it’s nice to have a spot like this in town.”