From the well-established Tin Pan Alley art collection to hopes for a High Desert Mural Festival, public art is quickly gaining steam in Bend. Cascade AE explores the importance, the need and the future of this growing movement.

A feeling of cohesive collaboration was in the air, something reminiscent of the unity found between street artists – those who work together to produce what could be stunning but usually illegal pieces of public art.

Except, these weren’t street artists. These were committee members championing for the street arts, and this feeling was uniquely found at City Hall, where the subcommittee of the Arts, Beautification and Culture Commission (ABC) of the City of Bend was meeting. The committee was discussing the revision of language for an amendment of the sign code for Bend. The amendment, if passed, would allow murals to be painted in the Makers District.

“It couldn’t look any prettier,” Gary Firestone, the assistant city attorney, deadpanned as the committee looked at a series of Google map images showing very bleak, industrial walls —prime retail for the large scale paintings street art brings. To say the committee was enthusiastic about the new amendment was an understatement.

“We’ve been looking at this for a few years now,” Matt Schiffman, ABC chair noted, “it’s an important move towards not only making art accessible to everyone, but also to beautifying the industrial parts of Bend.”

Schiffman had just returned from the POW! WOW! Festival in Long Beach, California, a week long event that brings together a global network of international and local artists, who together create large scale murals. He brought photos of the artwork to the meeting to showcase not only the beauty in the artwork, but to highlight the economic factor these festivals may bring to the local economy. Local businesses like hotels, restaurants and galleries can reap the benefits of an influx of art tourism, something Schiffman and his counterparts on the committee think could happen in Bend.

Douglas Robertson, the executive director for the newly formed High Desert Mural Festival (HDMF), echoes this sentiment. He too looks at something like POW! WOW! as an inspiration for the growing and thriving scene of public art in Central Oregon. Douglas hopes to bring POW! WOW! to Bend by hosting an annual mural festival, provided the city passes the sign code amendment, otherwise the artwork would be illegal. “I want Bend to be known nationally for its mural festival.” 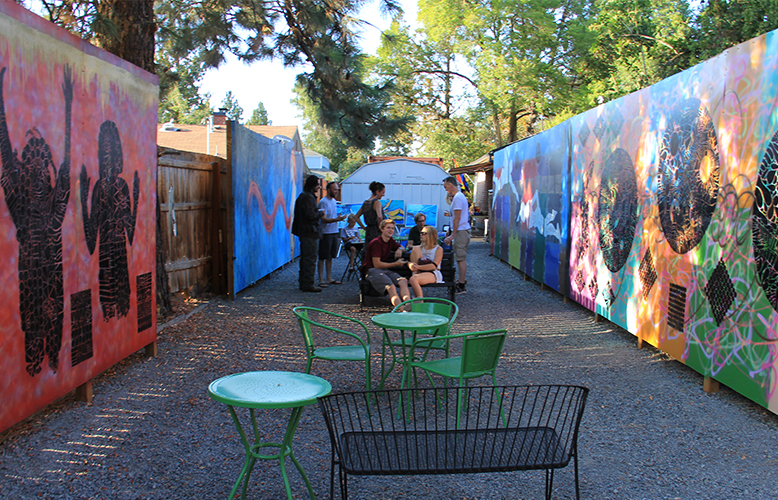 As the city makes moves towards legalizing murals, Robertson created the Midtown Art Alley, a concept space for public art that he hopes will act as a small artistic venue. The alleyway located at NE Franklin Ave. and NE Greeley between Fourth and Fifth Streets is set on private land that he donated and boasts 50, 25 and 15 foot walls, that already host some of their first artwork. “My goal is to have these walls painted over with new artwork every two months. I want to keep the conversation rolling by having this space be active and dynamic.”

Those goals would eventually stretch to the mural festival that is slated to be held in October of each year. There, the donated walls would be repainted each year. “It would open up the kind of interesting conversation that may be missing here in Bend. Pieces that provoke, inspire, create debates and educate.”

Education is important to Robertson who has helped encourage young artists to create large scale murals like those at the Cosmic Depot in Bend. The Teen Mural Project was a collaboration between HDMF, Base Camp Studio and the Bend-La Pine School District.  The eight-week program facilitated “the collaboration, development and execution of a large format art mural which can be seen at the Cosmic Depot.”

Allowing new artists to exhibit their art in this unique way, exemplifies the need for this creative art form in Central Oregon.

When Visit Bend launched the Tin Pan Alley Art Collection in 2013, the team behind its inception never thought it would be this wildly successful or as diverse. “Local artists have blown us away with their creativity in contributing pieces that include fabric, metal work and mixed media,” says Valerie Warren, vice president of operations and policy at Visit Bend.

She refers to Avlis Leumas’ strategic spots of bare wood in his piece Fire Breather which incorporated the material weathering and aging within the environment and Judy’s Campbell’s newest piece, Thomas’ Riddle, which includes lights so that it is visible even at night. The alleyway boasts the largest network of public art in Bend and is constantly evolving and growing. Local artist, Megan Phallon has just added her second painting entitled See You, See Me.

“People seem fascinated with the amount of public art in Bend, but they’re especially appreciative of these unique Tin Pan Alley pieces that expose them to high-caliber artwork while they’re doing mundane tasks like parking their car or shopping for socks,” adds Warren.

Just like the ABC Commission who wants more public art and is trying to make it accessible, so does Visit Bend want more artwork so that it can drive the tourist economy, especially in slower seasons like the fall and spring times when there are less outdoor activities on offer. 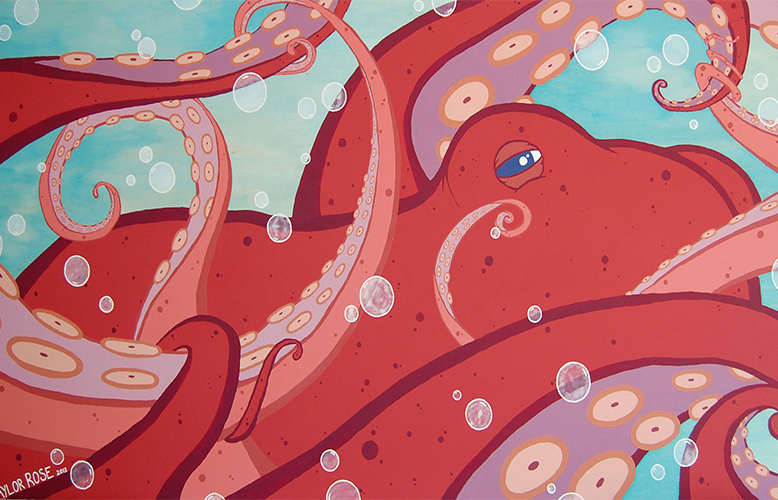 “Tourists flock to Bend in the summer months for hiking, biking and kayaking, but that creates an unhealthy seasonality curve for local businesses. Programs like [these]… prove a more stable revenue stream of businesses that rely on out-of-town guests,” suggests Warren.
Expanding the arts and culture scene of Bend is vital not only for economic forces but to the local community at heart. Warren drives home the need for it with these thoughts, “Public art is something locals can take pride in and something tourists can enjoy… it makes sense to incorporate arts and culture into the great outdoors.”
In the same vein as Robertson’s thoughts on refreshing murals every two months, Visit Bend wants to keep it fresh as they hope to auction off a handful of pieces each year to allow them to circulate new artwork into the program.

THE WORLD OF STREET ART AS TOLD BY ARTISTS

But what about the artists who create these pieces? From murals to installations, Bend has a wide array of diverse local talent, pioneering the spirit of public art. Sandy Klein, the artist behind the new mural out front of the tunnel at the Old Mill District knows the power behind public art. “Art just enhances the beautiful area we live in,” she states. “When I went to look at the tunnel for the first time, I was amazed at the fact that despite all the modification and commercial buildings in that area, it was still surrounded with natural habitats, beautiful flowers and wildlife… so I decided to do something that was colorful and fun and educational, all at the same time.”

Klein shares a glimpse into her world as the mural painter. Her colorful work of art entitled Birds and Flowers of the Old Mill was commissioned by Willian Smith Properties and the Old Mill. She is happy to share her gift, and sees the art as her legacy.
“I found it interesting,” she continues, “how people would just simply walk by [while I was painting] and say thank you. I really enjoyed talking to people…and was quite sad when I finished the painting as it was my morning routine for two months.”

Birds and Flowers of the Old Mill by Sandy Klein

Kaycee Anseth, who has a piece of art entitled The Day We All Looked Up (the featured image at the top of the page) in the established Tin Pan Alley collection, echoes the community sentiment and says “the community cares that I am here, creating.”

She follows her thought with these sentiments, “Art can be a tool, a mirror, a song, a love letter, a prayer. When it is in a public space, it can be all of those things in a wider scale, connecting even more people. When you have a project like the Tin Pan Collection, it creates conversations between people and the space they are in. It engages folks to where they are much more than an expanse of brick wall, viewing art makes you present while simultaneously transporting you.”

Taylor Rose has her painting Tangled exhibited at Tin Pan Alley and echoes the value of public art and notes that it should be a part of every single community. “I love the stumble-upon aspect of Bend’s public art,” she states. “You can spot it parking your car, biking down an alley, exiting a roundabout or grabbing coffee. Whether it’s something that people experience on a conscious or subconscious level, it matters that it’s valued and supported in the community. As a local, it’s been a wonderful way to contribute to the cityscape and create a visual connection between the public and the artists who live alongside them.”

Kevin Schwarting, an artist with a piece entitled Sunset Over Sisters, also at Tin Pan, supports that visual connection that artists create with their artwork to their location. “Bend has done a lot for my work, not only in the great response from the community, but in the incredible beauty and fun factor.” His inspirations stem from the diversity that is found in the outdoors.

Judy Campbell finishes off this sentiment and highlights the need for public art by stating, “For a tourist to wander into one of our alleyways, look up and see large murals hanging – what a great discovery! It really adds dimension to our town’s personality.”

So it seems that Central Oregon is in store for even more collaborative pieces of public art. Ones that engage, provoke and add discussion to our already vibrant community. With so many talented artists within our grasp, it is only a matter of time before Robertson’s dream of Bend being recognized as a national place for art to be realized. 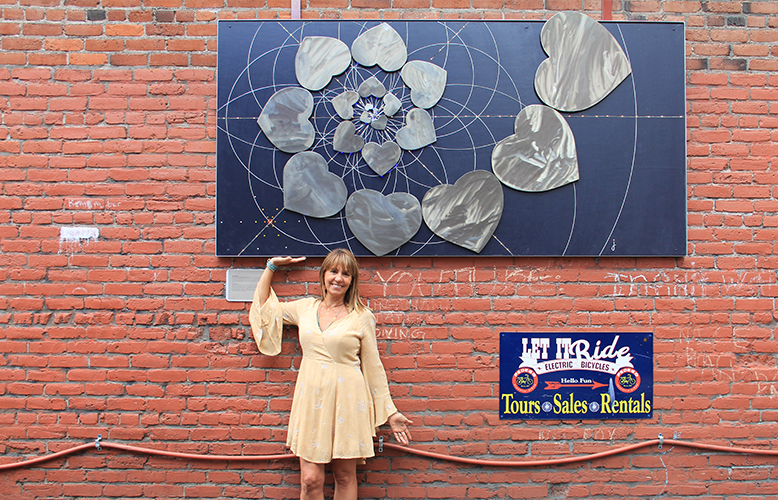