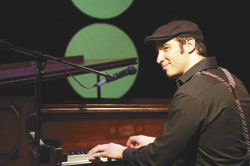 Join the Sunriver Music Festival for a high energy, toe tapping evening of music with jazz pianist Arthur Migliazza on Friday, November 7 at the SHARC in Sunriver.

The Boogie Woogie and Brew Concert is the kickoff for the Festival’s 2014–15 Fireside Concert Series. The concert will include a full concert and delicious chili feed dinner prepared by Country Catering. Sunriver Brewing Company is the concert brew sponsor and they will be pouring two of their tasty seasonal beers.

Award winning Blues and Boogie-Woogie pianist Arthur Migliazza began playing the piano professionally at the age of 13. Migliazza has been inducted into the Arizona Blues Hall of Fame, and was a finalist at the 2010 and 2014 International Blues Challenge. In 2005 Arthur was awarded the TAMMY Award for Best Keyboardist in Tucson, Arizona and in 2014 he received the Best of the Blues Award for Best Keyboardist in Washington State.

Migliazza frequently performs in Tucson and his hometown of Seattle, but his popular performances have taken him overseas to perform at the Notte Bianca Festival in Voghera, Italy, Club Tour in Amsterdam, Netherlands, Boston Dreams Jazz Club in Roppongi, Japan, Soho Jazz Club in Hiroshima, Japan, Festival International de Blues and Boogie in Paris, France and most recently at the Tchaikovsky Hall in Moscow, Russia.

In December 2013, Migliazza had a sold out tour in Russia, where he performed along with Bob Baldori and Martin Schmitt as the Kings of Boogie Woogie. The tour included Tchaikovsky Hall and included one number performed with the world famous Moiseyev Ballet dancers.

In addition to being a performer, Migliazza began teaching piano lessons at age 15. During the last 19 years he has frequently been a part of the staff at the internationally famous Augusta Blues Week in Elkins, West Virginia and Centrum Blues Week in Port Townsend, Washington.

A common response to watching Arthur perform is “Wow, I didn’t know it was possible to play the piano like that!”

Tickets are $35 for adults and $10 for youth (18 and under) and includes a full concert, dinner, beverages and round table seating. Doors will open at 5pm with dinner served at 5:30pm.