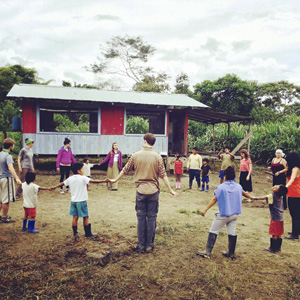 John Kish is starting up his own theatre company called Topsoil Theatrics. His first event will be March 31 at Dogwood Cocktail Cabin in downtown Bend — an evening cocktail cabaret from 8-10pm. It costs $10 to get in with seven local singers and three who recently moved here will be starring in the production. It will consist of two hours of musical songs.

John Kish is new to Bend since December 2014. He moved from New York City after four years but is originally from Philomath, Oregon. He currently works at Looney Bean Coffee and also a “cool paint and sip company called Art and Wine Oh My! where he guides people through paintings in two hours while drinking!”

Kish performed in community theatre in Albany, Oregon for many years starring in shows such as The 25th Annual Putnam County Spelling Bee and The Producers. After graduating from OSU in Horticulture, he attended a two-year program for musical theatre at Circle in the Square Theater School where greats like Kevin Bacon, Philp Seymour Hoffman and many more have graduated.  Upon graduating he was selected for New York City Town Hall’s Broadway Rising Stars and was honored to sing in front of thousands in the heart of Times Square.

He proceeded to fill his time with the American Mime Theatr Company, the renowned Snapple Theater and the first tour of Wanda’s World with Laughing Giraffe Productions. Kish had an opportunity to travel t  Ecuador with Dramatic Adventure Theatre to teach American theatre to villages and schools, as well as play writing with fellow actors.  “It was one of the most memorable adventures in my life and it changed my heart so much that I left NYC,” exclaimed Kish.

“I’m pumped about the receptive and innovative theater community here with their huge talent. I’m all about being collaborative and growing together with other theatre companies to make Bend professional just like Ashland and Portland. I would love to teach and lead workshops about auditioning, music books, acting, physical acting and more as well as learn from those here and what they have to offer!”

Now Kish is starting up his own theatre company called Topsoil Theatrics. His first event will be March 31 at Dogwood Cocktail Cabin in downtown Bend — an evening cocktail cabaret. It costs $10 to get in and it runs from 8-10pm. Seven local singers and three who recently moved here will be starring in the production. It will consist of two hours of musical songs.

“I’m hoping and in talking with Dogwood that this will become a monthly occurrence with different casts and song themes,” suggests Kish. “My goal is to start raising the bar on theatre in Bend so there can actually be professional paid actors here who have proper training. I also have loads of classes and workshops in my company’s future to help hidden talent shine with confidence. Auditions are always welcome and open to everyone.”

Kish says he plans to travel to Africa this June and back to Ecuador this fall to continue teaching theatre to impoverished communities and will be looking for sponsors of his humanitarian travels.