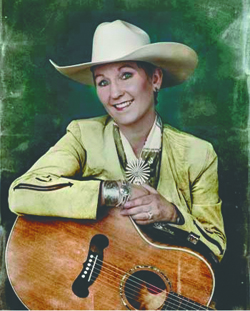 It’s the songs of cowboys, the west and a rare treat for western music fans of all ages. Western music legend Joni Harms holds a free concert August 4, 6-7:30pm at Desperado Boutique in the Old Mill District. Harms will perform many of her award winning songs with her daughter Olivia. This special event marks Harms’ only public engagement in Central Oregon this year.

Harms’ accolades include multiple Academy of Western Artists Awards. She holds the title of Entertainer of the Year in 2002 and Female Vocalist of the Year and Song of the Year from the Western Music Association in 2003.

“The majority of my songs include lyrics of the west, because I love to write about things I’ve experienced,” says Harms.  “Rodeo, cowboys, and the ranch way of living shows through a lot in my music.”

Harms lives on the Oregon ranch her great, great grandfather homesteaded in 1872. She resides there with her family.