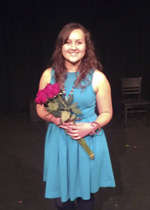 Last year 2nd Street Theater/Stage Right Productions held a competition for playwrights to submit unpublished plays for production at 2nd Street Theater. Out of 12 entries, and a final competition in October, Blemished, A Musical was chosen based on a combination of panel judges and audience vote. Blemished, A Musical, a play written by Bend native Katelyn Alexander, will be fully produced and presented May 2-10.

“I’ve been storytelling for as long as I can remember,” says Katelyn, who graduated from COCC in 2011 with her associate of arts in music. In  September 2012 she left for Kosovo as part of a creative arts outreach program where she spent nine months. She taught beginning voice and drama, made a second family and experienced mass quantities of culture shock.

Katelyn finds inspiration in many places, including the unexpected. “The inspiration for Blemished came from an obscure book in the Bible–a prophet who marries a prostitute as an example of God’s unfailing love,” says Katelyn. “I was fascinated by the concept of such worlds colliding and excited about a story that would intersect faith and art.”

“This is the seventh world premiere we’ve had here at 2nd Street Theater in the past four years,” says 2nd Street Theater Managing Director Sandy Klein. “The risk factor of presenting something unfamiliar is always an issue, but it’s exciting to be able to support local playwrights and to be able to provide the means and a venue for them to get their works in front of audiences and hopefully, eventually published.”

Synopsis: Set in the 1920s Mer, an ex-Cabaret performer, is now married to Hosea, a minister preparing to lead his flock. Try as she might, Mer’s worlds are destined to collide, questioning her faith and her place in the world. Directed by David DaCosta, with musical direction by Ben Larson.