Told through the eyes of real-life Beatles manager Brian Epstein, return to yesterday at the Tower Theatre on June 9 featuring renowned tribute band Abbey Road and the Mountain View High School string quartet, In My Life brings you back to 1964, when the Fab Four first invaded American televisions, performing I Want To Hold Your Hand on The Ed Sullivan Show.

Quite possibly the most iconic musical group of all time, the sounds of The Beatles continue to rock the music world today. In My Life continues that global love affair for Paul, John, George and Ringo. 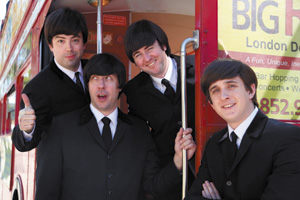 There were 220 Beatle tribute musicians that auditioned for this musical, but only the four best came out on top. The actors/musicians include Chris Paul Overall (“Paul”), Nate Bott (“John”), Jesse Wilder (“George”) and Axel Clarke (“Ringo”). Brian Epstein is played by Alxander Jon.

In My Life allows you to join the boys during some of their career’s most pivotal moments, from Liverpool’s Cavern Club and Abbey Road Studios to the rooftop of Apple Corp Offices. With Brian Epstein narrating the musical, In My Life takes you along for the ride of the true story from the point of view of The Beatles themselves. These are not stories taken from historians or journalists. In My Life pulls you in so up-close and personal that it will leave you feeling like the fifth member of the group.

The Mountain View High School string quartet will join the band for the songs Eleanor Rigby, Yesterday, A Day in the Life, Hello Goodbye, and Hey Jude. In a special touch, Yesterday is played as a scene in which the Paul McCartney character plays the song for the first time for Beatles producer George Martin, with the songwriter explaining that he envisioned a string-quartet accompaniment.

Don’t miss the show that “delivers” says the L.A. Times. It’s a one night only event on Monday, June 9 at 7:30pm at the Tower Theatre in Bend.