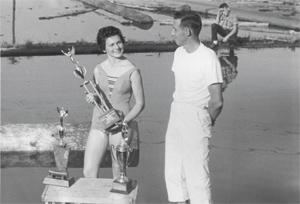 Between 1958 and 1972, four young women from the Lewiston, Idaho area took the log rolling world by storm. These four petite young women won 11 world titles at the Lumberjack World Championships in Hayward, Wisconsinin. In addition to all being from the same timber town they had another thing in common, their coach, a pond monkey at the local millpond.

The recently completed documentary Queens of the Roleo is their story. Producer Dave Jones stumbled upon this story by virtue of his early days as a reporter-­‐anchor at KLEW-­‐TV in Lewiston. “Back then I heard a little about log rolling in Lewiston in the 1960s. Recently I Googled the topic and was amazed to find out that Lewiston was, for a while, the log rolling capital of the world!”

Jones found that Bette Ellis, Barbara Peturka, Cindy Cook and Penni McCall won 11 world championships in 14 years. “That got my attention right away,” Jones says. “They were the ‘Michael Jordans’ of their sport.”

When Jones contacted the girls’ former coach, Roy Bartlett (age 87), he knew he hit the log rolling jackpot. “Roy Bartlett lives and breathes log rolling. He remembers everything from his years coaching and competing.”

Queens of the Roleo includes interviews with the four queens of the roleo, Bartlett, and others. The documentary features old home movies of the girls competing, old film of log drives and even priceless home movies of Roy Bartlett and Dick Moore log rolling in the Potlatch millpond.

Jones is a former television reporter and news director and a Telly-­‐award winning public affairs program producer. He has launched a Kickstarter crowd funding campaign to recoup a portion of the film production costs. www.kickstarter.com/projects/queensoftheroleo