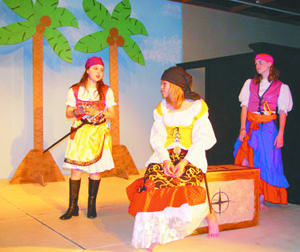 17 student actors from grades 4-8 are performing Jolly Roger & the Pirate Queen by Craig Sodaro on March 14-15 at the Journey Church.

Sarah Huffington is tired of her young life among the English aristocracy and craves excitement and adventure. Roger, her high-brow suitor, discovers she is enamored with pirates and disguises himself as Captain Blood, a ruthless rogue of the high seas. With the help of Long John Sliver, the characters sail off to the islands in search of treasure.

Retired on Treasure Island, Bluebeard and his motley crew of artisans party with coconut drink while their paradise is invaded by Sarah and her friends; now the Pirate Queen and sailor girl ship mates. Sarah’s parents, Lord and Lady Huffington come looking for her.

Fun for the whole family, Jolly Roger & the Pirate Queen will be performed by the Winter Play Production Class offered by Central Oregon’s premier program for student actors. By special arrangements with Pioneer Drama Service and sponsored by CTC, the play is being directed by Gary Bowne.