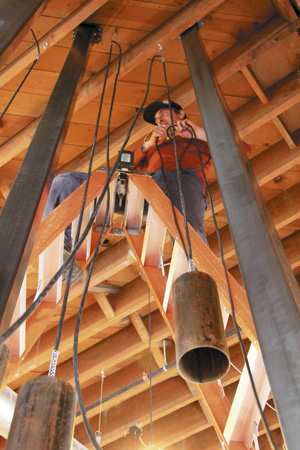 A look of preparation stretches across Ben Hull’s face as he details the layout of the new footwear display at the downtown Patagonia store. Upcycling and elimination of excessive manufacturing are hallmarks of Hull’s build-outs to pre-existing structures (seen at the 1000 Wall location, Pacific Northwest Patagonias, the new Ruffwear showroom and various residential homes).

To design the shoe wall, Hull first considered the height of the space. Then, what materials would suit. He embraced the open layout by fabricating three steel beams stretching floor to ceiling. Perpendicular to the beams, movable steel plates were attached to showcase each shoe. Finally, hanging like a rustic chandelier, Hull designed salvaged sprinkler pennants to hold bulbs and light the display.

When asked how he became a designer he points to his days maintaining the foundry and woodshop at Portland State University where he received his bachelors of fine arts in large scale installation. Emitting equal parts art and design, it isn’t surprising passerbys often mistake his work for functional instillation pieces. Observers describe his design as raw and minimalistic. Hull describes his work as having an “industrial edge without polish,” preferring to keep the engineering process simple.

Though he doesn’t consider his build-outs art, his appreciation for the character a piece of wood or metal accumulates through use would suggest otherwise. A belief that the nicks and scratches reveal an “inherent beauty” is obvious in his display. Hull says “It is this story, the scavenger hunt, the history of the material, that makes reclamation so attractive.”

Describing a cache of re-purposed wooden beams that used to comprise the Shevlin-Hixon building, now stored at his residence/shop/office in Bend, he explains his motivation for this particular salvage, “Straight grain, no knots… You just can’t find wood like that anymore.”

For Hull, ownership in every phase of the project fulfills his needs as a designer, artist, storyteller and upcycler (or self-proclaimed pack-rat). He continues to astound onlookers with his ability to transform architecture into functional installation.

The official unveiling of Hull’s shoe display will be featured at the Patagonia Surf into Spring event, March 13, 6-8pm. To participate in this exclusive event, drop by Patagonia to purchase your tickets ($5), all proceeds benefit Nomadcharities.com. Attendees will receive access to discounts on spring preview merchandise, give-away items and raffled prizes in addition to finger food and brews. Limited space, so reserve in advance.