After you get your geek on at The Avengers world premiere Friday, celebrate the art form they were born into at National Free Comic Book Day on Saturday, May 5 at Pegasus Books in downtown Bend.
Story by Jeff Spry. 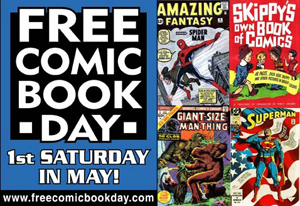 Superhero fever is sweeping the country and comics are hot properties whether you’re a certified nerd or not.   Free Comic Book Day began in 2002 as a promo event by comic book retailers to help bring new readers into independent comic stores.  It falls on the first Saturday in May each year, when participating  shops around the world give away special edition comic books absolutely free.   Coordinated by the nation’s largest distributor, Diamond Comics, it has exploded into a fun annual event encompassing over 2000 retailers in 30 countries giving away more than 12 million free comics.

“We’ll be open 11-6 and usually there’s a line down the block so try to get here early,” said Pegasus manager Cameron Saunders. “It’s a great opportunity for us and parents because it’s one of the few celebrations of comics that’s fairly kid-centric. Most titles are appropriate for all ages.  One is a hard cover collection filled with children’s stories from Mouse Guard and Labyrinth.  That was a neat surprise.  The publishers put out a mix of reprints and new stories, including a New 52 issue from DC, with content not available without taking part in Free Comic Book Day.   We do have to limit it to three items per person but it’ll be a great afternoon.”