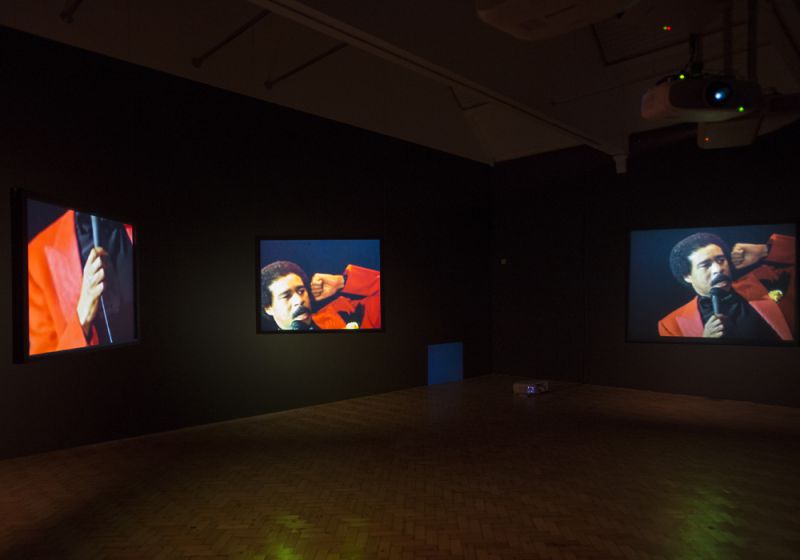 Luhring Augustine Bushwick is pleased to present We Need To Wake Up Cause That’s What Time It Is, a new exhibition by the artist Glenn Ligon.  A second exhibition with Ligon entitled What We Said The Last Time will be presented at our Chelsea location from February 27 through April 2, 2016.

The exhibition features Live (2014), a silent seven channel video installation based on the 1982 film Richard Pryor: Live on the Sunset Strip.  Pryor is famous for his darkly humorous and often explicit critiques of society, and Ligon has previously incorporated his standup material in a series of colorful text paintings.  In Live, Ligon removes Pryor’s voice, and thereby, the incisive comedy for which he is best known.  One channel depicts Pryor in full, while the other six channels each focus on a specific part of his body – his hands, head, mouth, groin, and shadow – to concentrate our attention on his animated delivery and emphatic body language.  Each screen is illuminated only when that particular part of the body is visible in the original film, thus the screens flicker off and on intermittently, prompting the viewer to walk around them in order to take in the whole installation.

At a certain moment in the original Live on the Sunset Strip, Pryor discusses his tendency to grow increasingly silent when he becomes angry – “the madder I get, the quieter I get” – and his voice gives way to furious gesturing and the mouthing of obscenities, revealing the sheer physicality of his comedy.  By deliberately muting his speech and fragmenting his image, Ligon compels us to see Pryor anew and focus on the non-verbal aspects of his performance – his vivid facial expressions, the perpetual motion of his delicate hands, even his bright red suit.  This emphasis on the body invariably raises questions regarding social constructs of race and masculinity.  Much of Ligon’s practice explores the limits of language, particularly as it relates to history and identity.  Live continues in this vein by eliminating language entirely to consider how meaning is conveyed through the body, as well as conferred upon it.

Glenn Ligon (b. 1960) lives and works in New York. He received a Bachelor of Arts from Wesleyan University in 1982, and attended the Whitney Museum Independent Study Program in 1985. A mid-career retrospective of Ligon’s work, Glenn Ligon: AMERICA, organized by Scott Rothkopf, opened at the Whitney Museum of American Art in March 2011 and traveled nationally. Ligon has also been the subject of solo museum exhibitions at the Camden Arts Centre in London, the Power Plant in Toronto, the Walker Art Center in Minneapolis, and the Studio Museum in Harlem, among others. He recently participated in All the World’s Futures at the 56th Venice Biennale (2015), and curated the group exhibition Glenn Ligon: Encounters and Collisions (2015) in collaboration with the Nottingham Contemporary and the Tate Liverpool.  Ligon’s work is held in the permanent collections of museums worldwide including Tate Modern, London; Centre Pompidou, Paris; Museum of Modern Art, New York; Whitney Museum of American Art, New York; Solomon R. Guggenheim Museum, New York; National Gallery of Art, Washington D.C.; Walker Art Center, Minneapolis; Art Institute of Chicago, Chicago; San Francisco Museum of Modern Art, San Francisco; and the Los Angeles County Museum of Art, Los Angeles.

For further information about the exhibition, please contact Lisa Varghese at lisa@luhringaugustine.com or 212.206.9100.

For press requests, please contact Caroline Burghardt at caroline@luhringaugustine.com or 718.386.2745.