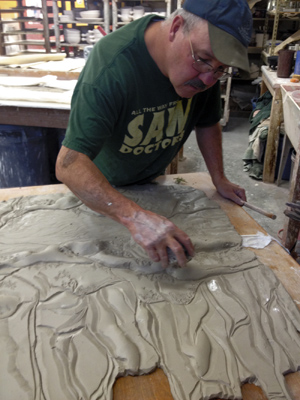 Michael builds his murals using clay as a canvas. Each piece is formed from one large slab of clay, usually four to five feet wide and two to three feet high. He then sculpts, textures and carves each piece to bring out the beauty and essence of the natural scenery.

Once he is finished with the basic design, Michael cuts the mural into smaller pieces, using the natural lines of the composition. After a long slow drying process and bisque firing, the colored glazes are applied by brush to the mural pieces. “The hardest part in making the murals is the Raku firing of each piece,” Michael explained.

Raku pottery is made by removing the pieces from the kiln at 1,800 F, smoldering in sawdust, and then cooling rapidly in water. “You give up your creation to the fire, not knowing if the colors will be right or if one piece will crack apart and ruin the entire mural,” he said. When finished, the pieces are reassembled on a wood backing and then are ready to hang in a home or office.

After getting his degree in art education from Western Oregon, Michael moved to Bend and along with his wife, Michele started Blue Spruce Pottery.

In 1982 they opened a gallery on S. Hwy 97 which would become a local landmark for the next 25 years. In 2004 their daughter and son-in-law, Melissa and Patrick Woodman, began working with them in the pottery business. After 10 years they are journeymen in their craft and now make most of the functional Blue Spruce Pottery.

This has freed up Michael to focus on the decorative Raku vases and lamps and now his new wall art.

“I love the art of working with the clay,” he commented.  “Also the science of developing the clay bodies, glazes, and firing techniques that turns those humble materials into a thing of beauty.”

Michael will be showing his work in February at Red Chair Gallery in Bend.