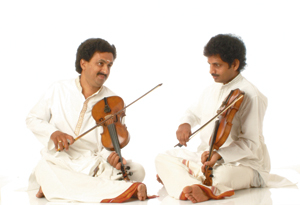 Experience and learn about South India’s musical melodies and rhythm in a COCC lecture/demonstration as well as a special evening concert.

Indian classical music is a preserved ancient art that features exciting to meditative melodies and intricate rhythms. Improvisation is a common theme throughout the performances and in the back and forth “musical conversation” between artists.

Musicians play “ragas” or scales with certain moods and specific notes to create sound palettes, and weave “talas” or specific rhythmic patterns around these melodic passages. The Indian violin (same instrument as the western version) is used extensively in Indian music North and South, but the techniques and playing style vary from the western style as in the seated on floor position with neck grounded on foot, alternative tunings and sliding between notes characteristic of Indian music. The Mridangam, a barrel shaped drum, and the Ghatam, a clay pot are traditional South Indian percussion instruments that can produce a variety of different pitches and sounds.

Nagaraj and Manjunath are from Mysore, India. They are brothers who grew up playing the violins as taught by their father who was also a well-known violinist from a young age. They are prestigious international touring artists and some of the top violinists in India. Being brothers in family and performance gives them a special sixth sense in playing together and with other artists. Rajarao and Giridhar Udapa are also top names in the Indian percussion scene and tour around the world accompanying instrumentalists and vocalists from India and western artists in other music genres as well.

These musicians are absolute masters of their art of improvisation and sound vibration, and they are highly skilled in their unique system of south Indian classical music. The Indian Ragas (melodies or scales), and rhythms truly transport the listener to another realm, a divine place of meditation and beauty. This is the exhilarating music of the heart. We are honored to share these four Maestros who play on international stages worldwide in this special Bend concert.

Nagaraj and Manjunath are brothers who have been playing the violin their entire lives. They were taught music at home with their father, who was also a well-known violinist in India. They have an almost telepathic synchronicity with each other when they play.  Their spontaneous improvisations are like sound poems created and then spoken through the music between them.

The drummers, Rajarao and Giridhar Udupa play the traditional South Indian instruments, the mridangam– a barrel shaped like drum with different pitches, and a “clay pot” called the Ghatam. Their skill and mathematics of rhythm are beyond what we know in western music… they also join in to the improvisational conversations between musicians with call and response intricate solo and expressive passages

The quartet of musicians which feature the Violin Brothers as instrumental artists, will play in the Classical South Indian style combining virtuoso instrumental techniques with breathtaking melodies and intricate rhythms. The interplay of these master musicians combined with their superior improvisational skills and depth of emotion merge to create an exhilarating show. Indian music is mostly improvised, and spontaneous musical conversations between the musicians occur in rhythm and melody. The music is both meditative and energetic at the same time. The performance selections are always a surprise and the artists often decide what they are going to play on the spot based on the audience and mood.

These masters of their musical art have enthralled audiences in the U.S.A., Canada, UK, Germany, France, Japan, Austria, Singapore and several Gulf countries.

Events are sponsored in part by the COCC office for Multicultural Activities and the Fine Arts and Communication Department.