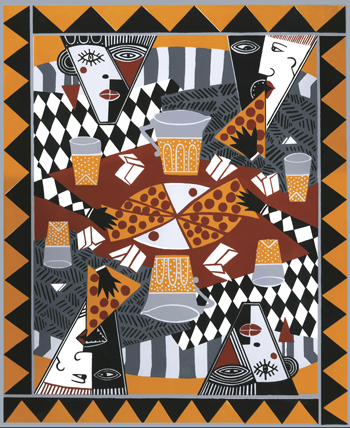 The production features the characters of Albert Einstein, played by John Page (Spamalot) and Pablo Picasso played by Alex Elmaleh (Working), who meet at a bar called the Lapin Agile (Nimble Rabbit) in Montmartre, Paris.

It is set on October 8, 1904 and both men are on the verge of an amazing idea (Einstein will publish his special theory of relativity in 1905 and Picasso will paint Les Demoiselles d’Avignon in 1907) when they find themselves at the Lapin Agile, where they have a lengthy debate about the value of genius and talent while interacting with a host of other characters.

Director David DaCosta (Spamalot, Assassins, Sordid Lives) has added an interesting twist to the telling of this story. Still set in the Lapin Agile, we now move the action forward to the present day, where new bar owners Freddy (Kevin McVey) and Germaine (Sherrise Esther: Sordid Lives, Evil Dead) discover that their guests are the ghosts of the past. “By setting up the bar patrons as ghosts, we lose nothing of Martin’s original intent, that is to explore the transcendent nature of Picasso’s work in art and Einstein’s in the field of Science. We simply take it to the next level, or to the beyond!”

There will be a champagne reception beginning at 6:30pm on opening night. Stage Right Productions will be donating a portion of the proceeds from that night’s performance to the director, David DaCosta’s family, who recently experienced astronomical medical expenses due to complications with the birth of their new son, Lincoln.