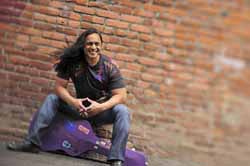 Keale was born on Oahu and raised near the shores of Kailua Bay. He has achieved both the Best of Central Oregon Singer/Songwriter and Best Local Musician” Awards. He has appeared on the Oregon Art Beat program as a featured artist. Bill’s talent is undeniable, his voice unmistakable, and his presence healing. His music is a celebration of the Spirit…pure music…all heart.

One thing is absolutely certain about the acoustic trio Burnin’ Moonlight – their love of music and snappy stage banter is infectious and engaging.  With diverse musical backgrounds, they shift smoothly between spirited traditional bluegrass, rootsy folk, a little country, swing and downright lowdown blues.

Tom and Heather Duo, from the five piece band Out of the Blue, is performing as a duo all over Central Oregon. Heather’s husky voice can be heard singing songs from Bonnie Raitt and Aretha Franklin to Joe Cocker or the Rolling Stones. The sounds of Tom’s acoustic guitar playing beautiful songs such as Blackbird or rocking the audience with upbeat dance songs will make you wiggle right off your chair.

Annie Bany has always been a performer, and her love for music runs deep. Her motivation for storytelling comes from the tall tales of the theatrical stage. She dreamed of being an actress on Broadway until she stumbled upon her love for songwriting after receiving her first guitar. She has morphed from an imaginative child to a passionate and creative young woman who has written or co-written every song on her debut album, Barefoot & Young.

The Notables Swing Band brings back the “golden oldies” from the Big Band era when swing ruled the dance floors. Many of their band members (17 total) remember those full sounds and infectious rhythms and in 2010 the band was formed to recreate this great music.

Lori Fletcher’s love of the classic eras of the 30s through the 60s, jazz, blues and R&B, inspired her to create Deco Moon Jazz where she fronts the band as their Girl Singer. Deco Moon focuses on the swingin’ standards, down and dirty Delta blues and classic Motown of years gone by.

Jenny Conlee has been playing music in Oregon for over 20 years, first with Calobo (a roots rock band in the 90’s), then to The Decemberists, and currently Black Prairie. She began playing accordion about 15 years ago and fell in love with the sounds of French Musette music. In the accordion program there will be traditional French and Italian songs as well as original compositions in the Musette style.

Ruckus is the very popular group from Bend. Each Ruckus member brings their own blend of entertainment experience to the group of five. Creating a unique musical collage, unlike any other, was intentional. Audiences are thrilled when they hear the sound of a song they forgot how much they loved.

All this great Entertainment along with 65 juried artist booths, a food court, an art activity center for kids and demos and more, can be found throughout the long weekend in the Village at Sunriver.