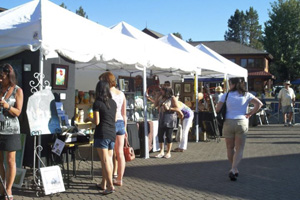 The 5th Annual Sunriver Art Faire is at the Village at Sunriver August 8-10. The Faire has grown over the last four years and this year will host 60 artists. Artists are chosen by a jury of four contemporaries or art specialists who ensure that the art is of high quality, true to its category, and offers a range of options for purchase. Categories represented in 2014 include painting, ceramics, photography, drawing, glass, gourd, jewelry, metal work, wood, textiles, sculpture, printing and mixed media. The variety is one of the most inviting features of the Sunriver Art Faire.

Best of Show Artists over the last four years:

2010: Karen E. Lewis states, “Water became a natural subject for me to paint.” Her oil paintings always include water, with sweeping brushstrokes to express the life of the water and its surrounding environment. Karen’s painting in 2010 not only won at the Sunriver Art Faire, but was chosen as the poster for the 2010 Sunriver Music Festival.

2011: Ross Mazur worked as a photographer in the furniture industry until he and his wife, Marcia, began making clay wall sculptures. His current unique wall sculptures are made of handmade paper, a technique involving myriads of texture and color and using the colors of the Southwest. He is now realizing his life’s dream, “…knowing that today I am doing what I truly love.”

2012: Cameron Kaseberg also began as a photographer and then studied graphic design at Portland State University. He is now represented in five galleries in Oregon and Washington and participates in many solo and group exhibitions throughout the Northwest. Cameron has taken the solvent transfer process of image-making further than any artist working today, combining the process with photo images to produce color, imagery, and texture that make a statement to all who collect his work. Raised on a ranch in Eastern Oregon, Cameron claims he has “…lived long enough to reflect on life through his art work…”

2014: Luis Enrique Gutierrez is a third generation ceramic artist from Nicaragua. His ceramics are representative of precision and artistry in sculpture and stem from the work of his family and a former Peace Corps volunteer who discovered the art and developed a group of Nicaraguans to share this exquisite work with the world.

The 5th Annual Sunriver Art Faire will be sharing a new Best of Show on the second weekend in August.