August 8-10 the music of love will be interwoven throughout each concert from Brahms to Mendelssohn to Beethoven to the unique charms and remarkable voice of Storm Large.

For his third full season with the Sunriver Music Festival, Artistic Director and Conductor George Hanson will lead the world class Festival Orchestra in four classical concerts and a Pops concert. The season also includes a solo piano concert plus free orchestra rehearsals, a piano master class and the annual Festival Faire dinner and auction fundraiser which took place on August 4.

The featured soloists will include the 2013 Van Cliburn International Piano Competition Crystal Medalist Sean Chen. The first American to place as a finalist since 1997, Chen won fans with his “exceptional ability to connect with an audience combined with an easy virtuosity” (Huffington Post). Also in 2013, Chen won the American Pianists Association’s Christel DeHaan Classical Fellowship, one of the most lucrative and significant prizes available to an American pianist.

The Pops Concert on Friday, August 8 will feature the sultry vocals of singer, actor, author and playwright Storm Large. Her solo program titled Crazy Arc of Love with the Festival Orchestra includes the classic love songs Someone to Watch Over Me, I’ve Got You Under My Skin and My Funny Valentine. Along with her solo career, Large frequently performs with Pink Martini.

The first classical concert on August 10 is a tribute to the Festival’s long-time Artistic Director Lawrence Leighton Smith who passed away in October 2013. Larry served as the Festival’s artistic director for 24 years helping to shape and form the Festival in 1977 with the Festival’s original founders. This concert includes Smith’s favorite piano concerto by Schumann performed by his previous student and long time friend Hunter Noack. 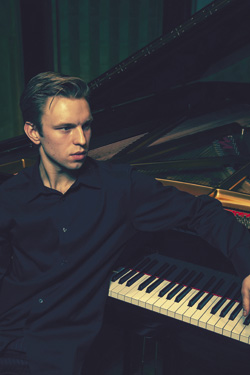 Noack lived in Sunriver throughout his childhood studying piano with Jodie Bischof and Patti Petersen. He was awarded eight scholarships from the Sunriver Music Festival’s Young Artists Scholarship program. These scholarships helped him continue his education at Interlochen Arts Academy, San Francisco Conservatory of Music, and the University of Southern California. Noack recently completed his masters degree at Guildhall School of Music and Drama in London.

On August 12 at the Great Hall, the concert will include a full Brahms program featuring virtuoso violinist Steven Moeckel performing the beautiful Brahms Violin Concerto in D major.  The concert opens with the Brahms Symphony #3. Moeckel performs as a soloist with orchestras and festivals in the US and Europe and he is the Concertmaster of the Phoenix Symphony.  He currently serves as the Concertmaster of the Sunriver Music Festival Orchestra.

The Central Oregon Mastersingers will join the Festival Orchestra on August 15 at the Tower Theatre performing a concert of music inspired by the works of William Shakespeare.  Under Clyde Thompson’s direction, the Mastersingers have earned the well-deserved reputation of being Central Oregon’s premier chorus.

Tower Theatre in Bend – August 15
IF MUSIC BE THE FOOD OF LOVE, PLAY ON – SHAKESPEARE
Featuring:  Central Oregon Mastersingers