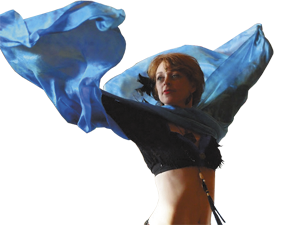 Aligning herself with a more harmonious and enlightened path, Jennifer Heiden Smith has taken a somewhat exotic excursion, filled with the slow rhythms and hypnotic movements of this ancient art. By Jeff Spry

Dancing under the stage name, Nalia, Smith teaches at COCC and performs at various events, fairs and functions in Central Oregon, entertaining and educating anyone fascinated with the mysterious traditions of one of the oldest artistic expressions known to man.

“Fifteen years ago I moved to Sisters from New York and took a bellydance class through COCC in Bend and loved it,” she said. “Little did I know I’d still be doing it years later.”

Smith continued learning her craft, starting a troop of dancers in Sisters in 1998 called Raqsafara, exhibiting her techniques and wares at showcases and craft fairs in Bend under the name Fancy Pants Belly Dance.

“The number one thing about bellydancing is that it’s fun and it’s also a great workout,” she explained. “It’s a chance to socialize and make a strong connection to an ancient culture, something that has been a living, breathing art form for centuries, going back to the beginnings of civilization.”

One thing she emphasizes most is that it’s much harder than it looks.

“In our culture we’re so used to moving our body in a linear fashion and in bellydancing you’re doing a lot of different, wiggly type of movements you don’t normally do in daily life. It’s great to strengthen core muscles and your posture to gain a better range of movement in your upper thighs and hips. It teaches you to have more respect for your own form and gain self-confidence in your appearance.”
The transformative effect bellydancing has on women cannot be denied according to Smith and countless other enthusiastic testimonies.

“Women sometimes feel they’re too old to dance or too fat or say my belly can dance on its own,” joked Smith. “In bellydancing you get to dance with the body you have right now.”

A new venture for Smith has been her retail enterprise called Fancy Pants, hand-dying silks and unique supplies for use in the bellydancing world.

“I have an art degree and thought I could make them better than what was offered on the market so I started making dyed veils to give my students a good starter kit, with a hip scarf, finger cymbals and a silk veil.”

She uses acid dyes in all her colorful creations with a Japanese Shibori technique, which is another word for tie-dye employing binds and folds.

“Whenever I’m out with Raqsafara or dancing by myself we love people to come by and ask questions and enjoy the visual treat. There’s a magical thing about bellydancers. You don’t have to be conventionally beautiful to have this particular charm beyond beauty, and that’s what I love about it.”