Marmara not only plays the part of muse and serves as the title track on Torrey Newhart’s debut album, but the inland sea in Turkey can be an apt metaphor for his approach to jazz music.

The Sea of Marmara is the connection between the Eastern Asian influence in Turkey and the Western or European other side of the country. Torrey, having visited Marmara in 2006, was not only inspired by the experience, but in turn has been inspired to explore connections in his music, combining philosophy and art for a greater purpose.

The bringing together of influences creates harmony and, yes, dissonance too, but his goal is to highlight the commonalities between the genres. “I want to explore the connection between music, philosophy and art and the unique universality that all three share with the human experience,” he states.

Torrey composes his music with these connections in mind, but the real-time harmony in this album comes with his father’s additions: paintings inspired by, and painted for each track on the CD.
“It’s the interplay of art and music,” Bob Newhart shared. “I paint to music, jazz in particular, and look at music as a painting with color. Music and jazz, and art and painting share a lot: textures, themes, rhythm and beat…I’m more into what does that sound like in color? What does that translate into on a canvas?

Bob has been a life-long jazz enthusiast and Torrey grew up surrounded by music, his career ambitions began early as well: at four years old he picked up a violin and at six the piano. Torrey is now a masters student in the Jazz Studies program at the University of Oregon with a focus on composition and arranging. Bend audiences may remember 2010’s Cabaret production by Cat Call Productions where Torrey was the musical director. 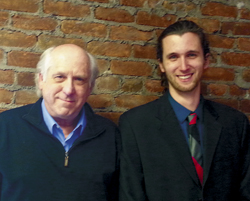 Bob’s art began recently, picking up the paint brush seven years ago. His first show at Sisters Art Works included a painting he did of Radiohead’s Exit Radio for a Film, which Torrey played at the opening…a successful collaboration that planted the seed for the Marmara project.

One of the most interesting aspects of the paintings inspired by music was the “testing” of the art. Torrey explained showing his band members his father’s paintings, and asking them to match the art to the songs, “They got them all right!” he said.

Philosophy factors heavily into Torrey’s compositions, believing that “music has the potential and power to remove people from themselves and take a step back from everyday issues in life, allowing one to reflect on and fully experience the diversity of humanity.”

Radiohead is popular with the Newharts, and Torrey has reimagined the song, Optimistic, a refreshing and upbeat version of the original, on Marmara. Another notable set of songs is the four-part Sage Passage Suite. The Suite is steeped in philosophic questioning and is a nod to Torrey’s middle name, Sage.

With Torrey on keyboard and piano, fellow band members included another Bend musician, Adam Carlson on drums, Sean Peterson on bass, Tony Glausi on trumpet, Adam Harris on saxophone and Eddie Bond on guitar. Bob produced the album and has helped with the business side of releasing a CD, a daunting process.

With the help of an Indigogo fundraising campaign, the Newports raised over $3,000 to finish the project. The critical funds went towards the mixing, mastering, promotion, design, CD duplication, legal and assorted fees.

Marmara CD Release parties are scheduled in three cities: June 5 at Jimmy Mak’s in Portland, June 8 at The Jazz Station in Eugene, June 13 at The Bodin’s in Eugene and June 21 in Bend at GoodLife Brewery. www.torreynewhart.com, www.reverbnation.com/torreynewhart.