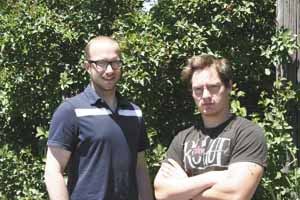 Local friends and partners, Brad Elmore and Loren Petersen, have released their first film, The Wolfman’s Hammer. Set in Central Oregon and billed as “a chunk of raw white-trash Shakespeare,” the gritty character drama approaches the story of a heavy metal-loving meth dealer and his cousin with intimate humanity. Nothing is simple in this film: family, love, drugs and revenge are woven together in a stark and beautiful composite, an impressive feat for the first-time film makers.

The two men grew up in Central Oregon and each went their own ways after high school. Elmore, the self-taught director, moved to Los Angeles to try and break into the movie business; his education was furthered in L.A. through opportunities to work on the sets of TV and movies. He finally returned home wanting to use local resources to make his first movie. Petersen, the executive producer, studied business in college and has been working in Bend for the past seven years when the two reinvigorated their idea of making movies together.

Elmore wrote the script with friend and actor Greg Hill specifically in mind. “He is a musician, model, bohemian and gorgeous freak,” described Elmore of his main character. He asked Hill to grow a beard and gain 20 pounds for the role, and cast him using his “raw and brutal sensibilities.” He describes his script as immersive and avante guard, purposefully structuring the movie so it doesn’t appear so purposefully structured.

One of the most striking elements of their film debut must be the $10,000 budget. A deftly crafted movie in visuals, sound and direction, Elmore and Petersen had to creatively find ways to secure equipment, coordinate actors’ schedules (all had full time jobs aside from the movie) and once the film was finished, publicize their efforts.

They formed the production company, Hammer Productions, to assist in the marketing of the film, and to begin securing funds for their next project, Snap, due to start filming this summer. 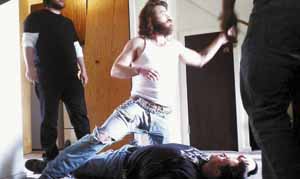 Finished in September, The Wolfman’s Hammer was rejected by every major film festival, so the partners did some re-edits, polished it up and put it online for free. “It wasn’t rejected because of quality, but because of what was called ‘no market quality,’” he said. “So I will let people grade it [for themselves], and watch it for free.

“Putting it up ourselves was almost an act of desperation, but it has given us control.” Elmore explained. Future screenings are scheduled around the country, but the partners are leaving the free version online. “They have to screen it on our terms; we are not taking it off the internet.

“The response has been overwhelmingly positive. People like the grass roots nature of it…director Chris Weitz (of Twilight and The Golden Compass) contacted us and tweeted that it was ‘shockingly good,’ and Hill’s performance was ‘astonishing.’ To get that from someone who knows what he is talking about is encouraging.

“I want to entertain people and make a career out of making movies,” said Elmore. “The Wolfman’s Hammer is a resume for us. You suffer and show people you can do the work [with a low budget], and now I want people to trust me with a bigger budget.”

“I had Lauren to help with securing funds and to figure out the location. He was the angel for the movie. Next time I want to just do the directing part of the job and not have to worry about the little stuff, like how to pay bills and have gas money. There is comfort in knowing that this next movie has a solid budget and won’t require as much sacrifice,” Elmore explained. “We aren’t in it for money,  just enough to continue to do this.”

Snap will also be written with Hills as the main character. “I am interested in late 70s character studies, like Saturday Night Fever, that focus on a person with a polarizing skill set, but goes deeper than that,” Elmore explained. “It will be a different movie, but have the same type of guts, it’s about Paparazzi photographers.”

Hammer Productions continues to seek investors for their next film and welcomes viewers to contact them with questions or comments.