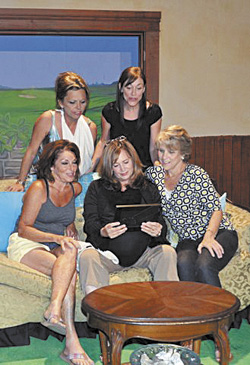 This year’s Sneak Peek will be offered for two evenings and one matinee, Friday and Saturday (August 23, 24) at 7pm and Sunday (August 25) at 1:30pm. This GALA Event will showcase a scene from each play, with a brief account from the director, some gourmet samplings, a no-host bar, and a chance to purchase season passes, become a member, and to volunteer for CTC.  Seating is limited to 130 patrons at each peek and a donation of $10/person is suggested.

With both feet planted firmly on the high dive, Cascades Theatrical Company plunges into season 35 by making a big splash with its opening production.

The Dixie Swim Club by Jessie Jones, Nicholas Hope and Jamie Wooten will open this milestone season. Under the direction of Juliah Rae, the play will open on September.

Five Southern women, whose friendships began many years ago on their college swim team, set aside a long weekend every August to recharge those relationships. Free from husbands, kids and jobs, they meet at the same beach cottage on North Carolina’s Outer Banks to catch up, laugh and meddle in each other’s lives.

The Dixie Swim Club focuses on four of those weekends and spans a period of 33 years. Sheree, the spunky team captain, desperately tries to maintain her organized and perfect’ life and continues to be the group’s leader.

Dinah, the wisecracking overachiever, is a career dynamo. But her victories in the courtroom are in stark contrast to the frustrations of her personal life.

Lexie, pampered and outspoken, is determined to hold on to her looks and youth as long as possible. She enjoys being married—over and over and over again.

The self-deprecating and acerbic Vernadette, acutely aware of the dark cloud that hovers over her life, has decided to just give in and embrace the chaos.

And sweet, eager-to-please Jeri Neal, experiences a late entry into motherhood that takes them all by surprise.

As their lives unfold and the years pass, these women increasingly rely on one another, through advice and raucous repartee, to get through the challenges (men, sex, marriage, parenting, divorce, aging) that life flings at them. And when fate throws a wrench into one of their lives in the second act, these friends, proving the enduring power of teamwork, rally ’round their own with the strength and love that takes this comedy in a poignant and surprising direction.

The Dixie Swim Club is the story of these five unforgettable women—a hilarious and touching comedy about friendships that last forever.