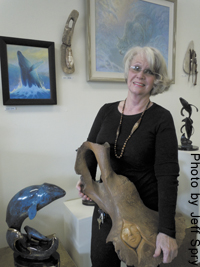 If rare prehistoric fossils and spiritually-charged bone carvings strike your artistic fancy, then venture into the Cha For The Finest Gallery in downtown Sisters for a journey back to the ancient past.

Gallery owner Cha (yes, that is her legal name) hails from the Land of the Midnight Sun, Alaska, where she lived and worked in Juneau for over 20 years selling exotic ivory scrimshaw, intricate bone artworks, primeval trinkets and charm pendants.

“I’ve led an interesting life you could say, and one thing always leads to another,” said the animated artist/author, surrounded by a mysterious collection of bleached walrus skulls, super-bison teeth, dinosaur embryos and whale bones.

Living in New Mexico and sick of the rampant drug trafficking there, she wanted to change her life so packed up her daughter into a little travel trailer and drove up to Alaska in 1974.

“It just happened to be the height of Alaskan pipeline construction and I got a job doing gold nugget jewelry. So someone asked me if I wanted to learn how to carve and it was great. Then I went into my own business and the first items in my inventory were billikins, good luck charms made out of ivory or anything. It’s a little man with a big belly and bushy eyebrows and I made bunches of them.”

Cha was the billikin queen of the north, but soon tired of selling them for $10 each. She learned that people all over Alaska wanted something different and so she evolved into making tooth faces, fossilized walrus teeth with detailed profiles carved in them.
“I also made cameo faces on mammoth hip bones, whale bones, moose and caribou antler or whatever I could get my hands on.“

With a surplus of inventory in the ‘80s, Cha opened her first gift shop in Anchorage called Forever in Ivory.

“In Ketchikan I was first introduced to the cruise ship industry where I had a direct relationship with passengers on the ships and that was very exciting.”

From Ketchikan she moved to Juneau and a more stable existence.

“Learning to carve was the best thing I ever did,” she said. “It opened a lot of doors for me. Regarding my three-letter name, there were a lot of male carvers in Alaska and I got copied often by manufacturers so I had my signature trademarked by a judge, based on a funny childhood nickname I had: Cha–Cha.”

Cha recently relocated from Arizona where she ran a popular gallery and cared for her ailing mother. After the passing of her mom last August, Cha finally moved to Central Oregon.

“I think I’ve carved more than 50,000 pieces in my life,” said Cha, mentally tallying them up. “It’s a lot, but if you think how many dishes you wash in a lifetime and add that up, it’s a lot too.”

Her path to Sisters was one of careful consideration and discovery.

“I was looking for a place that was not as hot as Arizona or cold as Alaska and needed a market where I could sell my animal prints,” she explained. “I’d seen pictures of the Central Oregon area and thought it was beautiful. But I didn’t like all the traffic in Bend since I don’t drive much and found Sisters to be the perfect spot.

The people here are super nice and friendly and helpful. And that’s what it’s all about, living the life you want.”

Her published books, Voice of the Ancients Book 1 and Book 2 are a creative mixture of new-age philosophy and prehistoric North American peoples and are available for purchase in the gallery.

“I’d never written a book before and it was hard. I love them and have already sold a hundred and not really advertised.”

Decorating the walls, pedestals and display counters is an eclectic array of bronze sculpture by Jacques and Mary Regat, hand-forged Damascus steel knives from David Mirabile and original animal paintings and prints by Bruce Shingledecker and John Svenson.
“I’ve had a lot of positive reactions to the gallery since I opened a few weeks ago. People say it’s expensive stuff and some of it is, like my Shingledecker paintings, but people also tell me they’ve never seen things like this in any store in Sisters. That’s what I want, to show them something new and fun and exciting.”