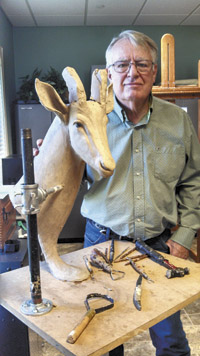 If an exotic African safari isn’t exactly in your travel budget, an excursion to Gary Cooley’s fine art gallery in Sisters might be the next best thing. Cooley’s The Collection Gallery is an amazing menagerie of Dark Continent animal sculptures and oil paintings on display in the tame settings of downtown Sisters, where his bronze creations snarl and stampede within his cozy new gallery.

“The reason I do the African is because for many years now I’ve done Safari Club International, an annual show with 1,500 exhibitors,” he said. “They’re an organization that does a lot of charitable and humanitarian things for the African people. Visitors who attend the show and support the organization love my African art so I do pieces for them and they really enjoy them.”

For someone who’s never stepped foot on African soil, Cooley has a remarkable affinity for the form and essence of the country’s native animal population.

“I’ve literally worked off hundreds of photographs. Morning and evening shots are always nice because they cast shadows and you pick up areas of light and shadow you might not normally see in direct sunlight.”

Cooley holds up a photo of a magnificent five-foot long bull elephant and recalls sculpting it on speculation and ended up selling 10 of them in four days.

“I think what makes them special is that I’ve always been able to capture a real look. One of the comments I get a lot are on my Cape buffalo, a very dangerous animal. There’s an old saying that in order to do a Cape buffalo correctly you have to make him look like you owe him money. They’re always mad.”

And not that Cooley doesn’t dabble in Western art as well, as an eclectic array of bucking horses, burly bears and bison bronzes can attest. Cooley’s comfortable corner gallery on Hood Avenue is furnished with leather couches and antiques, creating a relaxing atmosphere to absorb details of his work. On walls bordering the big game and Maasai warriors are oil paintings aglow with red rock canyons, dusty mountainmen and aspen groves. Well-known Central Oregon artist Cindy Briggs is the featured watercolorist.
“A friend of mine bought this building and he said I’d like you to move your gallery in there so he cut me a great deal. Upstairs there’s a 1,400 square foot office with a fireplace we’re converting to a living space with beautiful views of the Three Sisters peaks.”
An original clay model of a Grant’s gazelle sits in the light of his back room studio with sculpting tools scattered around it.

“I sit and stare at it and look at the piece from a distance and if there’s a problem it will show up and then I can correct it. This is a commission for a Colorado veterinarian and I’ve been into it about a week. Once a client picks out what they want I’ll go on the internet and find all the information I can.  I’ll take six or eight photos to start with then I might get more intense for close ups, eye pattern and around the nose.”

The entire modeling stage can take up to a month or more to complete before it is taken to the foundry, where it’s cut into pieces for rubber molds. Wax duplicates are then made and finally cast into bronze.

“I made my first bronze piece back in 1983. It was a nautical man holding a lantern in a storm. Since then I’ve done someplace between 100-150 bronzes, both North American pieces and African statues. I believe my first African piece was a Cape buffalo.”
Cooley enjoys an international clientele who seek out his art for its incredible distinction and realism. Many of his pieces grace the homes and businesses of a wide range of customers and friends.

“I’ve shipped pieces all over the world, to Africa, Hong Kong, Egypt and England. Even an American Eagle in Bush Senior’s home in Kennebunkport.”

His wife, Karen, has seen demand and appreciation for Cooley’s masterful art blossom over the past three decades. “His passion for art has deepened,” she said.“He and his brother were raised in an auto parts store in Southern California and when they sold it, Gary moved to Oregon in the late 1960s. He brings an enthusiasm and intensity to his art people respond to. They like that he gets the realism in each animal, especially in the eye. Not all artists can do eyes well. People comment on that all the time.”
Cooley’s hopes for the gallery are for people to come in and find something that might compliment their home, whether it’s Native American, Western or his moving African work.

“We really enjoy the fact that everyone has been so gracious and welcoming to us. We’re planning an open house celebration on Saturday, December 7 for the holidays so check our website.”