Central Oregon loves BendFilm. As over 100 filmmakers make their way to the high desert, the venues ready the popcorn and the public pours over the festival schedule, the excitement is palpable.

With the goal of elevating the art of filmmaking and their connection to Central Oregon, this year BendFilm has increased their outreach to include screenings at Warm Springs Reservation.

“I know for a fact that there is filmmaking going on in Central Oregon [outside Bend]…and it seemed natural to expand the programming,” said Todd Looby, BendFilm’s new director. “We have the biggest film fest in the area and we want to be a film promotional organization [in addition to] a film celebration hub.” 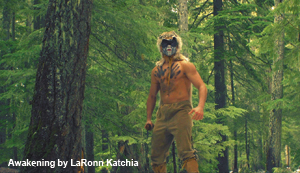 The collaboration with Warm Springs was spearheaded by BendFilm Board Member Juli Hamdan, but was solidified at an Arts & Culture Alliance meeting, of which both the Warm Springs Museum and BendFilm are members. “The ACA has as its core the desire of the membership to bring diverse arts organizations together to create opportunities for all communities in Central Oregon to participate in the arts,” explained Warm Springs Museum Executive Director Carol Leone.

“The Bend Film Festival is a fantastic event and their willingness to reach out to Warm Springs will encourage potential young Warm Springs film makers,” Leone continued.

In fact one Warm Springs filmmaker, LaRonn Katchia, will be premiering his short film, Awakening, before the showing of Winter in the Blood at the new Warm Springs K-8 Academy on Saturday evening, October 11.

Awakening is a tale about a young man living on the Warm Springs Reservation and the struggle between his modern self and the quest to face his inner Native American. “The short film was entirely written for and shot on the reservation of Warm Springs. Growing up there 18 years of my life I felt it was only right to create my film based around my hometown,” explained Katchia.

“Seeing that there aren’t many Native American directors out there or any actually filming in Warm Springs, I felt it was a prime opportunity…. One of my dreams is to bring more native films to the cinema and now that I have an opportunity to show it in my hometown in a proper venue it is one of the most amazing feelings. It is definitely the first step in getting Native films out there.” 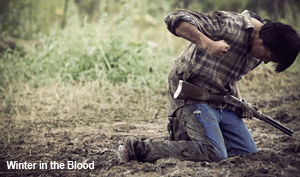 The feature narrative shown after Katchia’s short, Winter in the Blood, is also a tale about life on a reservation. The Sherman Alexie-produced film (Alexie is a poet, writer and filmmaker that draws on his experiences as a Native American with ancestry of several tribes, growing up on the Spokane Indian Reservation) is based on James Welch’s book by the same name.

Brothers Andrew and Alex Smith produced and directed the movie which traces the journey of a man returning to his home on a Montana reservation to confront his ex-wife and come to terms with the loss of his brother.

“We are always very keen to bring this film to Native communities, and interface with audiences that are predominantly Native,” commented Andrew. “We hope that viewers come away from the film recognizing the stark, darkly funny and unflinching vision of James Welch as conducted through the coils of our actors, and realized by cinematic veracity. We believe the film presents a real and recognizable world, and a powerful ‘soul journey’–  we hope (all) our viewers are moved by the emotional pulse of the story.”

Return of the River, showing at the Warm Springs school on Friday, October 10, is a narrative with global ramifications, exploring the complex relationship between communities and the environment that sustains them in the form of dam removal on the Elwha River on the Olympic Peninsula.

“I was thrilled to learn that BendFilm scheduled a screening at Warm Springs Reservation as the film features a Northwest tribe taking a leading role in the successful campaign to remove the Elwha River Dams,” said Jessica Plumb, producer and co-director for the documentary. Advocacy by the Lower Elwha Klallam Tribe was critical to this unprecedented restoration project, the largest dam removal in history.

“I hope that viewers will be empowered by this film, and consider ways to impact decisions that affect their own community. Return of the River is a film infused with hope, a success story for environmental and cultural restoration,” she explained.

Community engagement is an important part of Looby’s expanding vision for the festival. “I am continually in awe at how strongly Central Oregon supports BendFilm,” he said. “With this kind of support, this festival has the potential to do even more amazing things in Central Oregon and in the national independent film scene.

“The program is just so good that if the films are running and people are able to buy tickets it will be a success, but I want it to be really fun on top of that. Our logo says a Celebration of Independent Cinema so I want to take that part literally!” Looby exclaimed.

Celebrating independent cinema will be a cinch over the four-day festival; the opening night viewing of The Winding Stream, a film tracing the ebb and flow of the Carter family dynasty’s influence on American country music, will begin with a Carter-Cash infused musical set by Portland singer, Jen Smieja, followed by a party at The Oxford, and a late night bash for those midnight-owls.

Friday, October 10 will bring a full day of movies and a party at Hola! Saturday the public is invited to a Meet the Filmmakers event at the Drake with the awards party at the Mountain Room in the Deschutes Brewery.

Two new venues have been added this year: the Old Stone Church and the Volcanic Theater Pub replace The Oxford and CTC as they had prior engagements, and new midnight screenings will be available this year.

“One thing that we’ve talked about when we signed with the Volcanic Theater is that they want an eclectic programming, so I approached them and the Tin Pan Theater to extend their days till midnight so we have a really awesome shorts block with some crazy stuff and two narrative features that are hilarious and irreverent,” Looby said.

Long term he would love to expand their year-round programming to include monthly films to keep the enthusiasm for the festival high. “There’s a lot of little film things that go on in town, and I would like to get involved with that to help promote those films and use our brand to excite people. This is a town that celebrates independent film…We have a lot of assets to be the hub of the filmmaking network, definitely in Bend and then in Central Oregon.”

New to BendFilm this Year

Childcare:
For parents of young children who would like an affordable way to attend BendFilm on Thursday and Friday nights, October 9 and 10, BendFilm is offering child care through the Bend Montessori School. Tickets are $25 for four hours for up to three children and can be purchased online.

Business for BendFilm & Indie Women
Inspired by Pamela Hulse Andrew’s successful campaign, Indie Women for Indie Film where local women each donated $100 to fund several BendFilm awards, comes Business for BendFilm. Ben Perle, BendFilm advisory board member and general manager of The Oxford, has crowd-sourced local businesses to each contribute $100 towards awards. “The goal was to mimic what Pamela had started with Indie Women, we’ve raised close to close to $7,000 so far,” commented Perle. “The responses from businesses has been very positive. Everyone thinks BendFilm is good for the community and good for the arts.”

Ticketing
A new ticketing system is in place through www.bendticket.com. “It’s a really slick system,” Looby mentioned. “Films showing at Tin Pan Theater will be rush tickets only, we won’t have presales to avoid over-sales, and we ask that people get in line 20 minutes before the show and come out to the parties! It’s going to be a blast.”