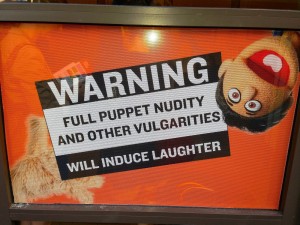 Avenue Q Paves the Way for Laughs at the Tower

As part of its Marquee Series, sponsored by Bend Broadband and showcasing local actors, dancers and musicians, the Tower Theatre Foundation premieres the Tony Award-winning hit musical Avenue Q at the downtown Bend venue for six performances, September 11-19.
Avenue Q is produced by Stage Right Productions, the nonprofit that operates 2nd Street Theater and who brought Monty Python’s Spamalot to the Tower in 2013. Avenue Q was conceived and written by Robert Lopez and Jeff Marx. Lopez was also the composer for The Book of Mormon.
Winner of the Tony Triple Crown for Best Musical, Best Score and Best Book, Avenue Q is an adult and politically incorrect coming-of-age story performed by puppets, animated by unconcealed puppeteers, alongside human actors.
Set in New York City all the way out on rundown Avenue Q, a recent college graduate named Princeton struggles with his purpose in life: finding love, losing love and finding it again.
“Avenue Q creates a puppet-filled world that is more reflective of the difficult, R-rated realities we face when we learn that real life isn’t as simple as we imagined,” said Sandy Klein, producer and managing director of Stage Right Productions. “But, as we learn from the residents of Avenue Q, life is all the more colorful and worthwhile for it.”
WARNING: Despite featuring puppets, Avenue Q is R-rated featuring adult topics, offensive language and an onstage portrayal of puppet sex, all done in good humor.
Avenue Q is directed by Karen Sipes with musical direction from Karen Sipes, Ben Larson and Tyler Cranor.
“We have gathered a terrific team of local talent including local puppet master Dave Felton, who plays Trekkie Monster, plus some of Central Oregon’s finest actors and singers,” added Klein. “We are thrilled to have been asked to bring such a different and challenging show to Bend and the Tower Theatre. These characters will definitely misbehave their way right into your hearts!”
The nonprofit Tower Theatre Foundation owns and operates the historic stage in downtown Bend. The Foundation’s mission is to be the leading performing arts organization, providing cultural and education programs that make an essential contribution to Central Oregon’s lifestyle and strengthen the community.
Membership, program information and individual and group tickets are available at the box office, 835 NW Wall, by phone 541-317-0700 or online www.towertheatre.org.