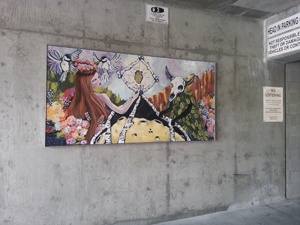 Bend’s newest public art project, the Tin Pan Alley Art Collection, will offer yet another opportunity for visitors and residents to engage with public spaces. With the installation of art by four different artists at the end of May, the project kicked off what is hoped to be a growing trail of art throughout the City.

The new collection was spearheaded by Visit Bend’s President Doug LaPlaca after visiting Columbus, Ohio and viewing their art trail in an industrial part of town. “They had art installed on sheets of plywood in alleyways…and I thought it was the coolest thing,” he said. “As we have developed different arts programs that has been in the back of my mind.” 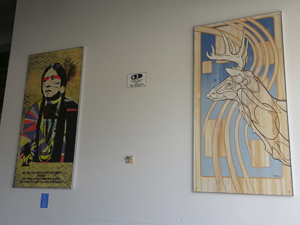 As the idea was forming and evolving, Jesse Roberts of Rise Up International became the catalyst. For the past few years Roberts has been involved in street art projects in the Middle East and North Africa. “Every time I came home I had the desire to create something in Bend,” he explained. “I often park in the garage downtown, and that is where I had the idea to do some murals in the parking garage. The walls are just bare concrete canvases. I mentioned it to Doug and Valerie from Visit Bend and they put the funding together for the project and acquired the permission from the City.”

“The City of Bend has been incredibly enthusiastic from the start,” commented LaPlaca. Three of the first four locations for the installations are in the City’s parking garage, with the fourth on the alley wall of The Oxford Hotel. “Doug LaPlaca and I have been talking about public and street art for a while now, and he came to us with this Alley Art collection idea and we loved it!” said Ben Perle, regional vice-president of operations for the Oxford Hotel Group.

The plan is to show people what the program is with the first installations and from there bring in additional building owners who want to participate. “In the long term, this program will expand all over the city,” LaPlaca said. “It’s a way for public and private organizations and artists to collaborate in a very low cost, highly visible celebration of the arts culture in Bend.”

Andrew Wachs, metal artist and fabricator, made the first 4’x8’ metal frames that were mounted in the identified spaces. Each artist then received one 4’x8’ sheet of plywood on which to work.

Wachs is also one of the first artists along with Roberts, Mark Rada and a Visit Bend’s Pillars of Art artist, Megan McGuinness. The artists, who are each compensated $400 for their work, aren’t confined to two-dimensions, as Wachs’ piece is a sculptural abstract representation of the fault strata of the local landscape.

“The Tin Pan Alley Collection is a really interesting departure from what we typically have going on. It’s more of a grass roots concentrated effort to feature local artists. The ‘gallery’ is an obscure location and a treasure to stumble upon,” said Wachs who has several public art pieces up around Bend including Ghost at the roundabout on Bond and Wilson.

While the title of the project evokes a specific alley in Bend, the collection will eventually span the city. “There is confusion over exactly which alley is truly Tin Pan Alley, I’ve been told different things,” LaPlaca explained. “Regardless, to me it’s not referring to a specific alley, it’s referring to a unique part of Bend’s culture, it’s the cool alley culture.

“Right now we are selecting the artists to see who is interested, and as it evolves, who knows where it will go. Visit Bend doesn’t have to own this program, it could evolve to a point where an independent organization could manage it. The important thing now is making it happen.”

“We believe public art should be part of any vibrant, forward thinking community and contributes to the overall attractiveness and diversity of any community,” said Perle. The sentiment was echoed by all involved with the project.
“Not only will it be a great way for the artist to get recognition,” said McGuinness. “It is going to make the city so much more interesting and fun. Being a part of something that provides beauty to others is so very rewarding!”
“The more that we can attract new and different kinds of visitors, the better off our tourism is going to be. Also great recreation alone doesn’t make for a tourism destination, its important that regardless of why people are visiting Bend, that we show them how well rounded our city is, and the arts and cultural offerings of Bend are a big part of that,” said LaPlaca.

“The fact that this effort is being led by Visit Bend is an indication of the increasing importance of public art to the visitor’s experience of Bend as well as to our own citizens,” commented Special Projects Director Brad Emerson of the City of Bend. “We are really pleased that this is occurring and will be interested in hearing the public’s response.”

Visit the City’s parking garage on Lava Street to see three of the artworks, and one on the exterior wall of the Oxford Hotel.