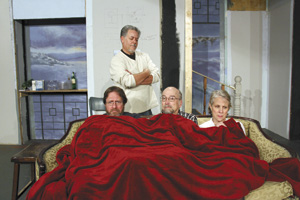 CTC is proud to announce the next regular season show will open on Friday, March 14 (with a preview night on Thursday, March 13). Funny Money is an English farce written by Ray Cooney whose writing career to date has sent 18 plays to London’s West End, including his biggest success Run for Your Wife.

Funny Money is a play that everyone can relate to. What would you do if you picked up the wrong briefcase on your way home from the office? Take it to the police, of course. But what if the briefcase contained nearly a million pounds in used bank notes? Suffice it to say that lead character Henry’s wife ends up with a nervous breakdown, Henry ends up with his best friend’s wife and a drug dealer ends up with Henry’s briefcase. There are also two policemen and a taxi driver whose lives will never be the same again.

Ron McCracken will be making his directing debut at CTC with this show.

This British farce will keep you laughing and engaged throughout.

CTC proudly presents All Aspects Theater. This is a hands-on, multi-week series of workshops for ages 13-18. From curtain up to curtain call this program will encompass everything to do with mounting a stage production. This program will be lead by Brad Thompson, who has a master’s degree from the University of St. Thomas, in St. Paul, Minnesota and an extensive theatre background.

Classes run on Wednesdays and Saturdays until April 19, culminating with a Shakespearean Monologue competition. Tuition is $150. Scholarships and multi-family member discounts available. For that teen who has an interest in any aspect of theater this is the class for them.