What does it take to put on a BEAT production? The Sun Will Come Out…. Tomorrow is a song known to people around the world. And now Central Oregonians can enjoy a live production of Annie brought to life by BEAT (Bend Experimental Art Theater) for two weeks this January. 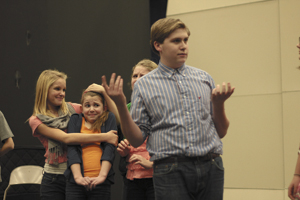 The Great Depression is the setting for Annie, her orphan cohorts, millionaire Oliver Warbucks, ditzy Lily St. Regis, and a whole cast of characters. This Annie Jr. version is slightly shorter than the original, and completely child friendly, while keeping all its original magic. Annie won Winner of the 1977 Best Musical Tony Award and is currently back on Broadway.

“For those unfamiliar with COCC’s Pinckney theater, you are in for a treat. The acoustics and comfort are wonderful. Many operas were performed in this theater where every seat is a great seat,” said Mary Kilpatrick, director and choreographer of Annie, and co-founder and artistic director of BEAT.

BEAT productions have a unique ten week process. The actors work two to three hours a day (depending on the particular play), four days a week at the BEAT Studio. In Annie, 32 children are in the cast.
In Annie, the 33rd BEAT production, Colleen Quinn is featured as the NYC girl (Star to Be), as well as one of Warbuck’s maids and a Healy girl. She described her Annie experience, “We have an awesome cast and terrific stage crew. Being in the show for me is showing the audience, my fellow actors and myself that I am unique. I love my cast and crew, and think of them as my family. Each rehearsal begins with warm-ups, stretching and singing. Our director and choreographer Mary Kilpatrick takes one group to rehearse a scene and dance number. Our musical director, Jimena Shepherd works with another group on a song. After that we come together and work the show piece by piece.”

Parents of BEAT actors take an active role as well. They work on everything from sets to costuming to ushering, enrolling sponsors and ticket sales. Most importantly, their emotional and practical support for the young actors, who have such a passion for performing, is inspirational.

Many others who are not parents make BEAT what it is. According to Howard Schor, co-founder of BEAT, “Our crew is filled with lovers of the arts. We have the greatest media support in the world. They are so committed to the arts, it is off the charts.”

BEAT is now working in concert with COCC and its theatre/drama club to bring those students and staffers into the BEAT family. It has been a natural progression for BEAT, a seven-year old non-profit. For example, Annie’s musical director Jimena Shepherd, a phenomenal singer and teacher, attends COCC. She also starred in BEAT’s first production And a Child Shall Lead in 2006 and will be directing the next BEAT workshop production The Pirates of Penzance at the Pinckney this spring.

The arc and reach of BEAT is a phenomenon that could expand beyond Central Oregon. Bruce Hinchliffe, a BEAT advisory board member, knows about such possibilities. Hinchliffe was one of the founders of The Tower Theatre Foundation. Before becoming chair of the foundation’s board he served as pro bono consultant for the successful campaign that led to the Tower’s renovation as a performing arts center. Along with partner Eli Ashley he now consults non-profits in governance, strategic and financial planning and fundraising.

Hinchliffe believes, “BEAT isn’t just about providing outstanding youth theatre, as beneficial as that is to the quality of cultural life in Central Oregon. It is also a significant educational and social asset. Over 700 of our youth have expanded their creative talents while imparting life enhancing social and presenting skills.

For some, it has turned their lives around and provided others with a vocation. It’s filling a cultural void for budget strapped schools and, at the same time has worked with the schools to have 20,000 of their students attend BEAT performances at a fraction of the ticket cost for the general public. How can BEAT share their knowledge, experience and proven methodologies with communities in the Pacific Northwest? That is the question. We might call it BEAT Repeat. This is certainly something to seriously consider as we develop our vision for BEAT’s next five years.”