Cascade Street Distillery, a tasting room and bottle shop in downtown Sisters, has joined the ranks of regional creators of fine vodka, gin and bourbon, all prepared in small batches.
Owners Nick Beasley and his sister Katie started the company in 2014 deciding to open a retail outlet to get people absorbed in their line and the whole micro-distillery craze.
“ 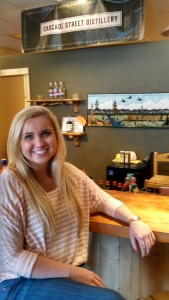 The first task was getting the bourbon started, since it typically takes at least two years to age,” said Katie. “We purchased oak barrels from Kentucky and so far the bourbon has been gently aging for nine months. To be a true bourbon, barrels need to originate from that specific area. The next step was creating our smooth North Sister Vodka, released in April. The final addition to the roster will be a South Sister Gin in August.”
Local artist Dan Rickards of Clearwater Gallery painted the art for Cascade’s distinctive bottle labels, creating a tableau of the Three Sisters Peaks when gathered together in a gift box or displayed on a bar shelf.
“We’re really excited to be here in Sisters, where we can reach out to residents and visitors to share our product and educate them on the exacting processes we use in production, said Katie.“Our premium North Sister Vodka and Broken Top Bourbon are kept pure an without any additional flavoring. The South Sister Gin is made with a large amount of fresh botanicals from the High Desert and hand-picked Ponderosa pine pods that give it a sweet, refreshing taste.”
The Beasley’s expansion plans include the purchase of the old Barclay horse barn across from the Sisters Eagle Airport, to be restored and transformed into the production facility. They intend to refill the lake and plant crops of botanicals in the adjacent nine acres. Construction is set to start sometime at the end of this summer.
“We feature all of Dan Rickard’s artwork and our newest Cascade brand of spirits. It all started with a painting of his called Cascade Skyline my parents bought years ago that was split up in three for our vodka, gin and bourbon,” explained Katie.
A tempting variety of specialty cocktails like a Central Oregon Bloody Mary, Twisted Lemonade with marionberry or raspberry vodka, and fresh-squeezed Greyhounds and Screwdrivers are available at the bar or tableside in addition to an individual flight menu. Their tasting room is stocked with a selection of Wild Roots fruit-infused vodkas imbued with flavors like marionberry, raspberry and apple-cinnamon.
North Sisters Vodka is already featured in fine restaurants and hip watering holes across Central Oregon and the Portland area. Their ultimate goal is to be recognized by a wider range of consumers and picked up by some national distributors.
Cascade Street Distillery
261 Cascade Ave, Sisters
541-549-1082