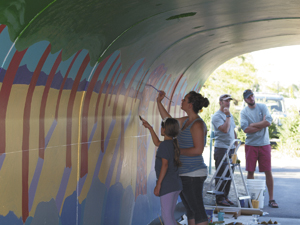 The Old Mill pedestrian passageways under SW Columbia Street were transformed during a burst of activity one lovely September afternoon creating colorful riparian and forest scenes to the delight of daily walkers, runners, strollers and bikers. The collaborative effort, spearheaded by a group of Nike designers in town for a work retreat, was a true model of synergy that resulted in Bend’s newest public art.

“It was very serendipitous,” said Cate O’Hagan, executive director of Arts Central. With a history of organizing community projects, Nike reached out to Arts Central via staff member Lisa Edgington and local artist, Sue Manley. “The teams’ objective was to give back to the community by utilizing their values of creativity, leadership and mentoring,” Edgington said.

William Smith Properties, owner of the Old Mill District, became engaged in the project. “We [Arts Central] try to infuse art in the Old Mill any chance we get, and they were very happy to participate in the project. We had talked about doing murals in these pedestrian undercrossings for about ten years, but it’s just a matter of having the bandwidth and the money to do it. Nike gave us a corporate contribution from their design department to help support our work and William Smith Properties chipped in on materials.”

Once it was decided that murals would be painted in the tunnels, Arts Central Board Member Gillian Rathbun suggested artist Paul Alan Bennett for the job. With extensive mural experience, and over 25 years experience as an art teacher, Bennett would prove to be an ideal candidate.

Children from the Boys and Girls Club were invited to paint the murals along with Arts Central Art Academy students. “We thought immediately of our art academy students as being a good target group because of their commitment to sequential learning,” O’Hagan said.

The project progressed quickly: three weeks from initial contact to paint on the walls. “When the project evolved into creating art for the tunnel passes, it was agreed that the mural would represent the artist’s vision, incorporate the Nike brand and enhance the local environment,” said Edgington.

Bennett’s vision sought to incorporate the surrounding natural environment in the design. One side became an underwater walk through, and the other, a forest scene. “I had just painted an aquarium themed mural in Rainier six months before,” Bennett explained. “It was really fun and I wanted to do another mural and build on what I did there, so this was a perfect project for that.”

He utilized the concrete sections of the passageways as part of the design, and as a way of organizing the murals. The resulting underwater design is a lesson in color theory: a progression of colors takes viewers through complementary colors, color values, hues, shades of gray and followed by cool and warm colors of the spectrum. The whole tunnel is lined with letters connected to resemble rocks with Nike footprints running along the bottom.

“I had a great big drawing of the mural so the painters could see what was happening on the larger scale, see the colors and understand the color theory. It gave a way to organize everyone; we had a kid in every area doing the numbers and a designer doing the background and the fish, everyone could be working at once,” Bennett said.

Since the designers only had two hours for the project, organization was a must. “The design incorporated the sections of the tunnel and the artist’s color-coded drawing truly helped the ‘painters’ know what colors to use where and allowed room for 20+ people in each tunnel,” Edgington said. “No one stood around with nothing to do and they could move around to different areas.

“The excitement gained strength as more and more colors were painted on the walls. Comments from the public were all supportive and enthusiastic. I remember one young father and his son – the little guy was so excited to see fish. Many who passed through commented ‘What an improvement, this was so needed, we love it!’”