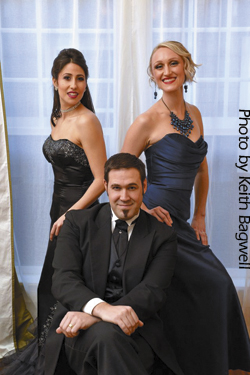 Bring your musical appetite on March 30 at 3pm to the First United Methodist Church (680 NW Bond St., Bend) for a delectable afternoon of music. At Operalicious, Melissa Bagwell (Soprano), James Knox (Baritone) and Jimena Shepherd (Soprano) will serve up many of opera’s most beloved arias, duets and trios with Jean Shrader and Jonathan Shepherd on piano. From Mozart to Verdi, Rossini, Donizetti, Bizet and Gounod, this special performance will leave your ears hungry for more!

“Many people perceive Opera as being an ‘uppity’ and inaccessible art form,” says Bagwell. “With Operalicious, it is our goal to find a way to bring this amazing music to Central Oregon on a more regular basis, make it fun and remove the barriers and misperceptions that make people think opera is only for the elite. The amazing characters from all of the opera arias and duets we will be singing are timeless — you could easily transport any of their stories into 2013 and they would still ring true and touch people with their beauty.”

Knox, professor of music and director of choral activities at Central Oregon Community College, directs the Cascade Chorale, the College Choir, is the founder of the vocal jazz ensemble Central Singers and is a sought after guest clinician throughout the Northwest.

Bagwell was most recently seen in Central Oregon in CASA’s Tribute to Andrew Lloyd Webber concert at the Tower Theatre in 2012 and as Mary Sunshine in Catcall Productions’ Chicago in 2011.

Jimena Shepherd has performed in many productions from Seattle’s Lyric Opera Northwest to Cascade’s Theatrical Company, Children’s Music Theatre Group and Bend Experimental Art Theatre. Her most noted performance as Christine Daaé in CASA’s Tribute to Andrew Lloyd Webber concert was met with rave reviews at the Tower Theatre in October 2012.

Jonathan Shepherd began playing the piano at the age of six and studied classical technique and repertoire with Central Oregon pianist Jan Saito. He has performed in many recitals and competed at the Oregon Bach Festival, where his interpretations were praised as “dramatic, expressive and original.”

Free Admission. Donations accepted. 100 percent of proceeds will benefit Polio Plus through Rotary of Bend and Rotary International. After 25 years of hard work, Rotary and its partners are on the brink of eradicating this tenacious disease, but a strong push is needed now to root it out once and for all.