After six years of planning and meeting with thousands of community members, the Redmond and Sisters Libraries are about to undergo construction (Redmond) and remodeling (Sisters). Both libraries close as of January 15, but temporary spaces will also open during construction and remodeling. 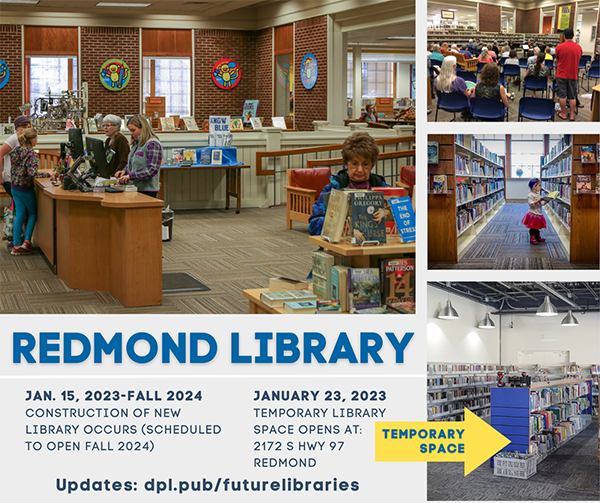 The Redmond Library will be closed as of January 15 to allow for construction of a new, 40,000-square-foot library, which will replace the existing building.  A temporary Redmond Library will open on January 23, 2023, at 2127 S Highway 97 in Redmond. The library asks that customers hold their returns during the transition week (January 15–22); no late fees will be charged for materials. Holds will be available once the temporary space opens on January 23. The new Redmond Library is slated to open to the public in fall 2024. You can learn more about the new library and get updates at deschuteslibrary.org/futurelibraries/redmond. 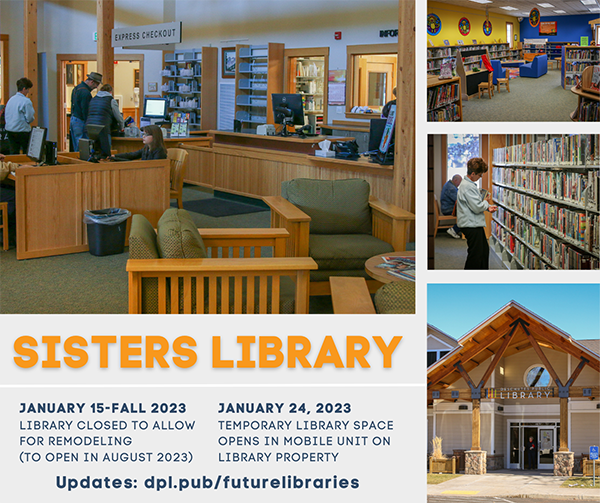 The Sisters Library will be closed starting January 15 to allow for remodeling. The updated library will re-open in fall 2023. A temporary Sisters Library opens on January 24, 2023, in a mobile unit on the current library property at 110 N Cedar Street in Sisters. As in Redmond, the library asks that customers hold their returns during the transition week (January 15–23). No late fees will be charged for materials, and holds will be available once the temporary space opens on January 24. You can learn more about the new library and get updates at deschuteslibrary.org/futurelibraries/sisters.

“We’re so appreciative of all the work library staff did to find temporary locations and to make the transitions as smooth as possible,” said Library Director Todd Dunkelberg. “While everyone is excited to get into the new library in Redmond the remodeled library is Sisters, being able to offer temporary locations during construction and remodeling is a great way to continue supporting our communities during this time.”

Once complete, the new 40,000-square-foot Redmond Library will feature large and divisible meeting spaces for community use, collaborative and co-working spaces, DIY spaces for creative activities and programs, a dynamic children’s area, a dedicated space for teens and more.

Updates to the Sisters Library include bright and open spaces that welcome customers with amenities such as flexible meeting and tutoring rooms, an enhanced children’s discovery space, improved lighting, a cozy fireplace and reading area and a large community gathering space.

In November 2020, Deschutes County voters supported the Library’s bond measure to expand and improve libraries across the county. In addition to building a new library in Redmond and updating the Sisters Library, bond funds are being used to remodel and update existing libraries in Downtown Bend, La Pine and Sunriver, as well as the construction of a new library at Stevens Ranch in east Bend to serve all Deschutes County residents.

Find more information about the Library’s bond-funded projects on its website: deschuteslibrary.org/futurelibraries.