Carsten Holler’s solo exhibit Carsten Holler: Experience at the New Museum in the winter of 2011-12 has been criticized for being all spectacle and no art; but whether it was museum-worthy art or just entertainment, the show clearly established that art, which is about the viewer’s direct experience is indeed hot, and makes good business sense for the museum as well. Commentary by local artist Aaron Lish.

The Holler exhibition, which included a sensory deprivation tank, a three-story, high-speed slide, goggles which inverted what the viewer saw (literally turning the world upside-down), and much more to challenge your perception of the world around you, brought in over 100,000 visitors in its three month run! 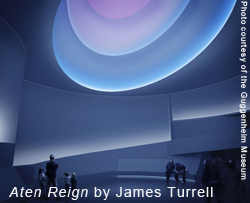 This summer it would seem that the other major New York museums are hoping to capitalize on this popularity as well with a number of different experiential exhibits. To me, the immersive environments of Aten Reign (2013) by James Turrell, at the Guggenheim, Rain Room (2012) by Random International, at MoMA, and Your Waste of Time (2013) by Olafur Eliasson, at PS1, all illustrate how art is indeed big business with big budgets. I found these works a bit less effective in inducing serious contemplation about the issues being investigated by the artists, with Eliasson’s Your Waste of Time being an exception. For Eliasson’s piece, a dialogue is created within the work, in part, by the excessive use of resources to produce the piece itself. But both Turrell and Random International have definitely found ways to win people’s time and money as indicated by the long lines for both exhibits (expect to wait in line 4-5 hours, outside in the heat, for Rain Room). 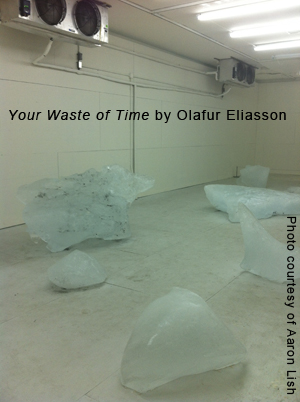 The piece that bothered me the most was actually Eliasson’s Your Waste of Time (2013) at PS1. However, it bothering me has also impelled me to spend much more time thinking it over in my mind. For the work, Eliasson has installed 800 year-old pieces of glacier ice in a specially constructed space at MoMA’s PS1. The ice was shipped from Iceland (his homeland) to New York and is displayed in a huge walk-in freezer that visitors can enter. The sign outside the door of the exhibit says that solar panels have been installed on the roof to help offset the electricity used to preserve the ice. According to one of the guards, the constructing of a freezer space that could be kept cold enough to preserve the ice in New York’s summer heat was a serious challenge (whether she was being candid, or whether this was a part of the work, I’m not sure).

Walking around inside the gallery-turned-freezer I was hit by how out of place these chunks of ice were in the completely artificial environment created just a few miles from Times Square. As with many of Eliasson’s works designed to raise awareness of one’s surroundings, there are significant contradictions at play in Your Waste of Time (2013) (title possibly alluding to the Tina Dico song of the same name). The most obvious contradiction is that although the work is about the changing global environment, the natural resources consumed for the project are quite significant (collecting the ice from the sea, storing it, transporting it, keeping it frozen the whole time…). Such use of contradiction in art can be a very effective way of triggering new ways of thinking on a topic; however, I do question whether enough viewers will be led to re-think their own resource consumption (and act on such thoughts) to make this exhibit a benefit to the environment in the long-term. And this has been the root of what has bothered me about the work. In the end is it just another big-budget spectacle?

At least Eliasson implicates himself, our culture (through the museum space), as well as the viewer (yes, I went to see a chunk of ice that had been shipped thousands of miles and is being kept frozen while the outside temps are in the low-90s, so I am a part of the work, and thus am culprit to being a part of such extravagance). I guess you could say we all contribute to changing the environment through our indulgence in excesses. 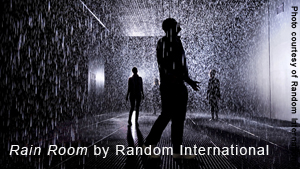 The other thing that has me bothered, or rather puzzled, is why people are willing to wait in line for hours just to dance in the rain and (possibly) not get wet (Rain Room). What is it that makes these immersive art environments so appealing to visitors, even when they may be less than compelling as art? What void is filled by these experiences?

As I ponder this question, I also find myself wondering that if art is a reflection of the culture it is created in, and if museum-goers are clambering for being entertained through spectacle-like spaces, than what does this say about our culture? Is it that art must become spectacle to compete with the spectacle created by a capitalist culture; or is it that extravagant, immersive environments, as art, have actually become a part of that spectacle? Have the museums been consumed by the great capitalist machine? And if so, what does this mean for the future of art?

Local artist and curator Aaron Lish recently completed his MFA through the Art Institute of Boston at Lesley University. His artwork focuses on critical analysis of our culture and society through engaging participants in generative dialogue. You can read more about his work on page 7 of the June issue of Cascade A&E,  http://issuu.com/renee.patrick/docs/ae_june_2013, and on his website at  http://artcriticalthinking.blogspot.com.