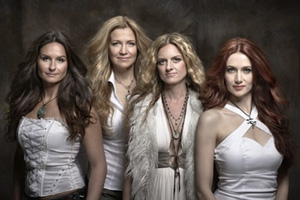 If it’s been a long time since you’ve rock ‘n rolled, you might want to go check out Zepparella, the amazing all-girl Led Zeppelin tribute band on Thursday night, December 11 at 8pm at The Belfry in Sisters. This sensational San Francisco-based, four-piece retro rock band was first formed back in 2004 by drummer Clementine.

The band is currently joined by guitarist Gretchen Menn, bassist Angeline Saris and new lead singer Noelle Doughty. Clad on stage in blinding all-white, their aim is to deliver the historic rock music and honor the legacy of one of the greatest rock bands on the 20th Century, exploring improvised magic within the killer catalog of sacred Zeppelin songs.

“Zepparella is coming to Central Oregon this week and we’re super excited to have them,” said Belfry owner Angeline Rhett. “They’re not just a trendy cover band anymore, they’ve surpassed that category by bringing authenticity and passion to the timeless music of Led Zeppelin. We like to reach for new genres of music and have something for everyone. Opening for Zepparella is Groovy Wallpaper featuring Skip VonKuske, who plays with the Portland Cello Project and Vagabond Opera. It will be a cool and unique night of music.”