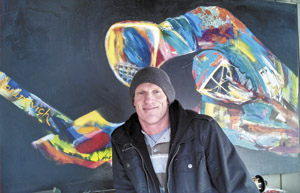 Born on the Fourth of July brings with it a certain patriotic promise of future greatness in bold hues and harmonies. For ex-pro athlete and artist Todd Marinovich, that primrose path has been punctuated by the thrill of victory and the agony of defeat.

Recently resurrected and freshly fortified with a wife, Alix, and two small children, Marinovich has settled into his mercurial roles as husband, father and artist amid a wealth of captivating scenery, expressing memories, regrets and triumphs on the blank canvas.

Finally free of the substance abuse and legal entanglements that precipitated his temporary plunge, Marinovich is diving into his artistic career with relish and unabashed enthusiasm.

“I started loving art at a young age,” he recalls. “I remember it being the highlight of my schools days. Early on it was P.E. and art and both those periods went by in a flash. And that’s when you know where the magic happens, when time is non-existent, and I was lucky to find two passions in sports and art. Those were my first drugs, really, and that’s what drugs do, put you in the moment where time is not a factor.”

Marinovich moved to Sisters last November and was drawn to the area because it was the “true Oregon” and had experienced the area over the years growing up and later in life. An astute student of the arts, he’s fascinated with movement and color in all their inexpressible forms and incarnations. In 2005 he met an influential artist named Jerome Gastaldi in Fallbrook, California.

“He had this killer art compound and he just blew my mind. Everything about his style and perception was incredible. He taught me there are no mistakes in life and art and in the act of painting he was utilizing a method of abstraction I’d seen, but never really absorbed or appreciated it until I saw the process.”

Two decades removed from rifling perfect spirals to swift, acrobatic receivers for the University of Southern California (USC) and the Los Angeles Raiders, Marinovich is enjoying the invigorating acts of discovery as he develops and matures as an artist.
Whether painting a haloed gridiron hero with dramatic blooms of color, transforming an abstract twist of wood or splashing a sprawling sunset across an equestrian arena, the breadth and bravado of Marinovich’s captivating art is hard to ignore.

“There was a spontaneity and feel to Gastaldi’s work and not a lot of calculation. My experience through athletics taught me that when I take the mind out of it and I can just react and feel, that’s where I find my performance catapulted to another level. He was having so much fun even though he took it so seriously. I moved down there and stayed for about a year and got to see so many artists come through there. I got a crash course in modern art, from Jasper Johns to Willem de Kooning and Piet Mondrian, the godfather of modern art. With found-art, I love the idea that something worn down by nature is picked up and given life again.”

Hunkered down in his man-cave studio in downtown Sisters, under a protective canopy of ponderosa pine trees, warmed by a crackling woodstove fire and an enthusiastic coal-black Lab puppy named Juniper, Marinovich has created a comfortable fortress of solitude to spur his unbounded imagination. 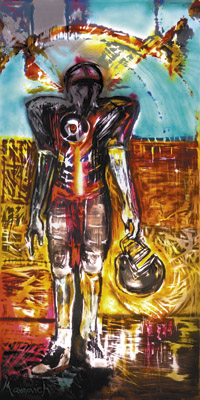 “I’m addicted to color so I’m just finishing up one of my Plexiglas pieces I’ve been commissioned to do,” he said. “It’s a technique I did for the 2011 ESPN documentary on my life in preparation for a gallery showing. A self-portrait called The Alchemist. Eight feet by four feet acrylic spray paint on Plexiglas. It’s a football player, the costume is there but it’s not what he truly is. There’s a radiant life force burning inside and that’s where the magic lives.”

Marinovich’s current project is a hypnotic 120-foot long by 17-foot tall mural of a dreamy sunset emblazoned across the outside of Rene Schwab’s indoor equestrian arena. 120 cans of spray paint were depleted in its creation.

“She calls her ranch the “cowgirl hide-out” and pink is her color so I said how about an electric pink Central Oregon sunset? And she said bitchin’, when can you start? That was fun because I’ve always wanted to go big and spray paint was a medium I’d been messing with these past few years.”

The rebel once branded Robo-QB sits back, taking a quick drag on his cigarette. A pair of guitars hangs on the wall beside an eclectic collection of art books and football history volumes. Vivid portraits of former NFL quarterbacks, Bernie Kosar and Terry Bradshaw stare him down. Skateboards and an autographed Sonic Youth poster share space with a tough framed picture of his father, Marv, from USC’s 1962 national championship team.

The paintings and limited-edition prints have a bold, naked sensibility to them, whether portraits of aging athletes, musical icons or multimedia landscapes, each piece is injected with a rare rawness and synthesis of stark, infectious color.

Carrying on his thematic works of heroic gladiators on the turf battlefields, Marinovich captures the stoic leadership of an aging George Blanda in a particularly striking piece.

Blanda, who retired from the NFL in 1976 at the ripe age of 48, is depicted in the same silver and black pencil work stitched into his faded Raiders uniform, drawn with a slightly cartoonish slant, his deep facial lines worn proudly like a bruised badge of honor, weary of a life dedicated to football, perhaps commenting on the artificiality of sports heroes and their grass-stained costumes.

Surging into the new year, Marinovich has his mind’s eye focused on sculpture.

“Right now my sculpture is all I can think about,” he admits with a grin. “My dad had been sculpting redwood for years and we once collaborated on a nine-foot piece of African mahogany and that was my introduction to sculpture. Now I’ve done a handful of both metal sculptures and wood sculptures and I want to try applying multimedia techniques by combining wood, rock, glass and water. That’s what art is to me. It’s the mystical and the indescribable.”