Once upon a midnight dreary, and just in time for Halloween, celebrated actor Alastair Morley Jaques brings his renowned one-man show to The Belfry in Sisters on Friday, October 25 at 8pm. Story by Jeff Spry 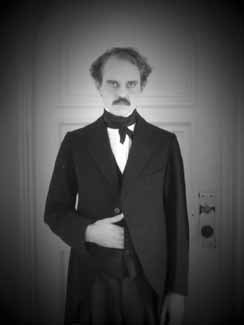 Jaques has performed this macabre, tour-de-force act in Bend at the Tower Theatre, the Old Stone Church and all over the Pacific Northwest, resurrecting the master of horror with astonishing detail and emotion.

For two hours, the morose genius of Baltimore’s infamous son comes alive under Jaques’ masterful direction, discussing his life, dreams and inspirations behind such immortal literary classics as The Tell-Tale Heart, The Black Cat and The Raven. Poe died in 1849 in Baltimore under questionable circumstances and the mystery of his life remains shrouded in the same murky mists inhabiting so many of his sinister stories.

“I’ve been doing Poe for about six years now,” said Jaques. “It all started with me wanting to create a one-man show. I had watched Hal Holbrook do his famous Mark Twain Tonight, so that was a huge inspiration. For the formation of my act, I rediscovered his complete works and read some major literary biographies on him to get details and historical accuracies correct.”

The vintage church venue of The Belfry is the perfect spot to invoke the spirit of one of America’s most celebrated authors and poets. It’s a spooky, immersive experience sure to liven up your Halloween season and bring a supernatural chill to your veins.

Jaques’ act is a living, breathing entity, constantly evolving and changing every time he steps onto the stage dressed in death black.

“I have so many hours of Poe material committed to memory and the experience is never the same twice. Everyone usually knows The Raven, it’s his magnum opus and I typically close with that. Poe wasn’t quite as dark and brooding as his reputation would lead you to believe and I try to reveal his more comedic aspects. People really come to see this show around Halloween for a bit of a thrill and a scare but I don’t lay on the gothic romanticism too thick.”

An interactive Q & A session with Edgar himself will follow the performance. Tickets for this eerie event are $10 in advance/ $12 at the door and can be found online at www.belfryevents.com

Belfry owner Angeline Rhett invites all living souls to button up their best frock coats to join fellow Poe fans for a haunting night of ghoulishly good entertainment, with weird tales of woe, lost love, talking black birds and perhaps even a premature burial or two.

Seating is limited so don’t be caught out alone in the cold! Hot cider, homemade soup and bread, beer, wine and cocktails will be available for purchase. The Belfry is located at 302 E. Main Street in downtown Sisters. 541-815-9122.