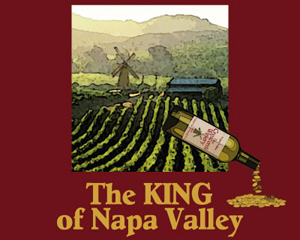 For thirsty worshipers of the glorious grape, a local play centered around the California wine industry during its formative years of the 1960s goes down mighty smooth.

Recently Bend’s 2nd Street Theater presented the world premiere of The King Of Napa Valley, a winery family drama written by James Michael Lee and directed by Susan Benson. Its two-week run continues through March 30 and offers an engaging look at a dysfunctional family who lives and dies by their mouthwatering reds and whites in an era of blossoming competition between rival vineyards and winemakers.

Playwright and actor James Lee slips comfortably into the main role of philandering patriarch Salvatore Crescenti, a dreamer, gambler and ambitious winemaker who boasts of producing fine wines to rival the French.

But there’s an old saying in the vino business – If you want to make a small fortune in the wine industry, invest a large one.

Sal’s attempt to start his own windmill-stamped Crescenti label and signature winery is infused with family squabbles, private greed, financial turmoil and the perils of choosing golden success over blood bonds.

The play is semi-autobiographical as Lee, a California native, grew up in the fertile Napa Valley during that era and peppers the dialog with authentic industry terms, jargon and slang. His own real-life family started their own vineyard which they still own today.

“Jim said he wrote my character with me in mind,” she said. “It’s been double duty but it’s fun work. The story comes from his own personal history so he’s got that heritage and knew the Mondavi’s. He was inspired by their story and the whole commercialization of the Napa Valley. Being a California girl I was really interested in the dynamics between the family members and loved the complexity of the characters. Jim has been a dream to collaborate with and I hope everyone comes out to support this locally-written, home grown play.”

Bend’s 2nd Street Theater is located at 220 NE Lafayette Ave. Tickets for The King Of Napa Valley are $18 for adults, $15 for students and seniors. Wine tasting will be offered during the play’s run. Runs through March 30.