Click to read PDF, or scroll down for web story. 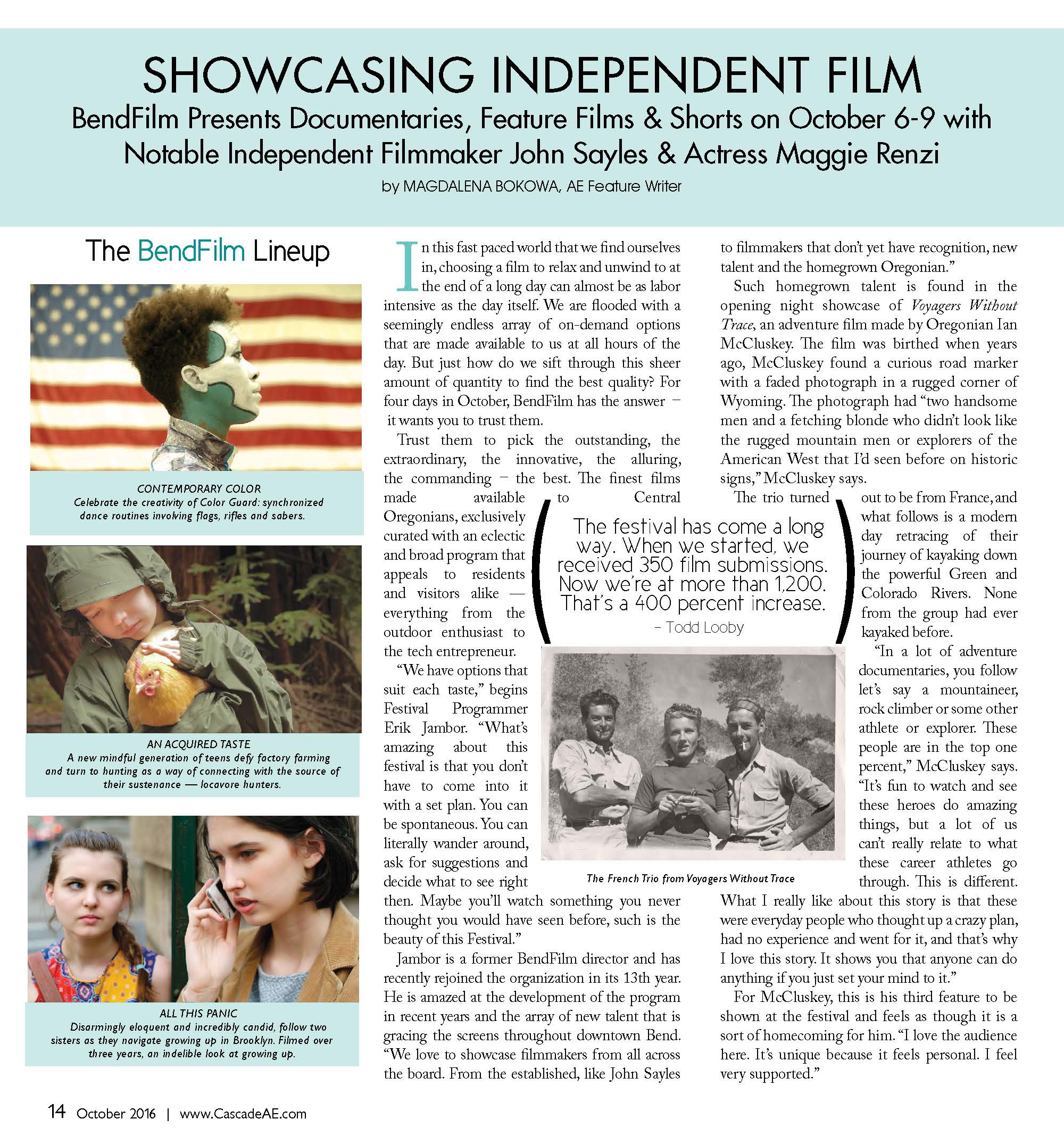 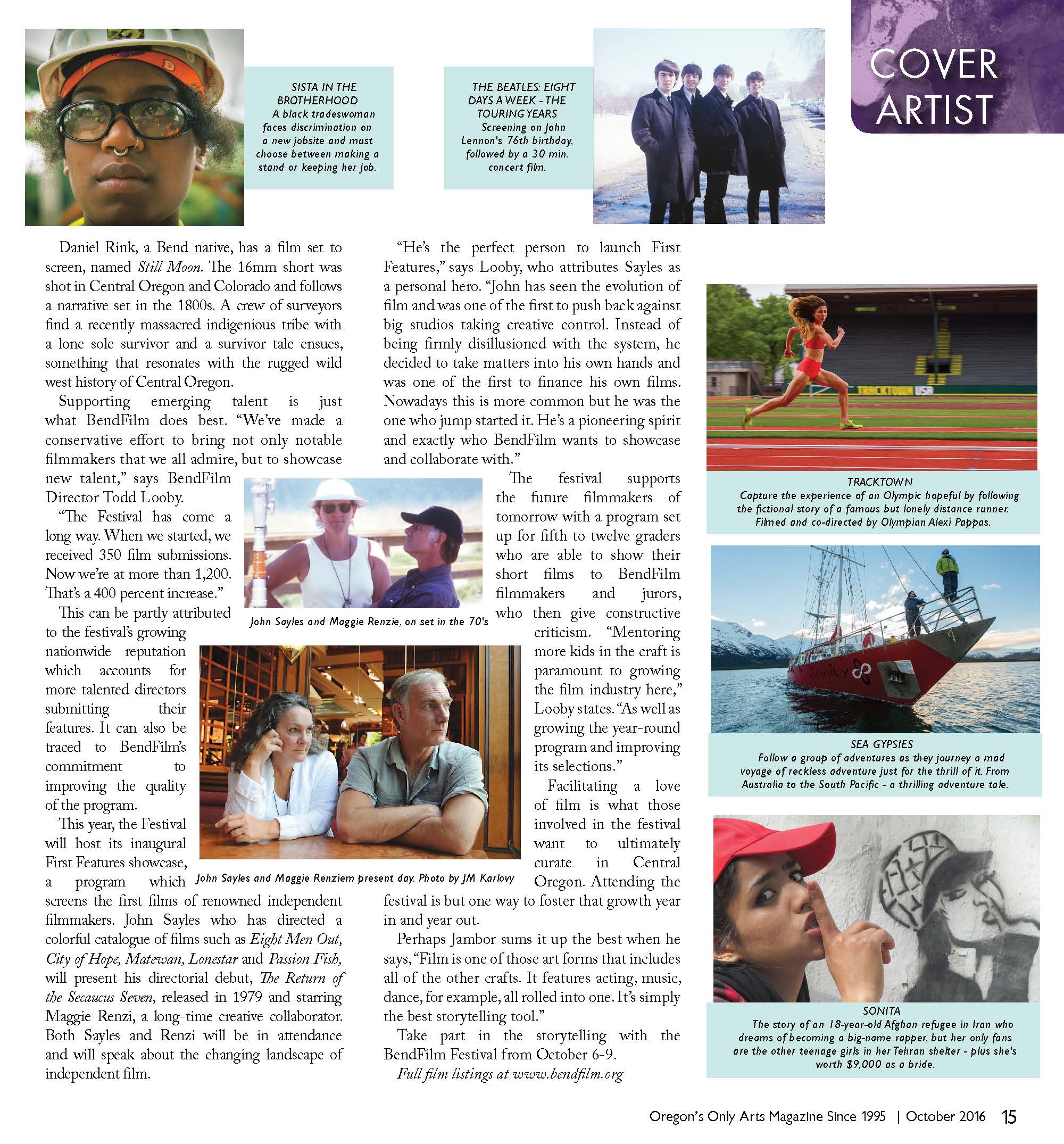 In this fast paced world that we find ourselves in, choosing a film to relax and unwind to at the end of a long day can almost be as labor intensive as the day itself. We are flooded with a seemingly endless array of on-demand options that are made available to us at all hours of the day. But just how do we sift through this sheer amount of quantity to find the best quality? For four days in October, BendFilm has the answer –it wants you to trust them.

Trust them to pick the outstanding, the extraordinary, the innovative, the alluring, the commanding – the best. The finest films made available to Central
Oregonians, exclusively curated with an eclectic and broad program that appeals to residents and visitors alike — everything from the outdoor enthusiast to the tech entrepreneur.
“We have options that suit each taste,” begins Festival Programmer Erik Jambor. “What’s amazing about this festival is that you don’t have to come into it with a set plan. You can be spontaneous. You can literally wander around, ask for suggestions and decide what to see right then. Maybe you’ll watch something you never thought you would have seen before, such is the beauty of this Festival.”

Jambor is a former BendFilm director and has recently rejoined the organization in its 13th year. He is amazed at the development of the program in recent years and the array of new talent that is gracing the screens throughout downtown Bend. “We love to showcase filmmakers from all across the board. From the established, like John Sayles to filmmakers that don’t yet have recognition, new talent and the homegrown Oregonian.”

Such homegrown talent is found in the opening night showcase of Voyagers Without Trace, an adventure film made by Oregonian Ian McCluskey. The film was birthed when years ago, McCluskey found a curious road marker with a faded photograph in a rugged corner of Wyoming. The photograph had “two handsome men and a fetching blonde who didn’t look like the rugged mountain men or explorers of the American West that I’d seen before on historic signs,” McCluskey says.

The trio turned out to be from France, and what follows is a modern day retracing of their journey of kayaking down the powerful Green and Colorado Rivers. None from the group had ever kayaked before.

“In a lot of adventure documentaries, you follow let’s say a mountaineer, rock climber or some other athlete or explorer. These people are in the top one percent,” McCluskey says. “It’s fun to watch and see these heroes do amazing things, but a lot of us can’t really relate to what these career athletes go through. This is different. What I really like about this story is that these were everyday people who thought up a crazy plan, had no experience and went for it, and that’s why I love this story. It shows you that anyone can do anything if you just set your mind to it.”

For McCluskey, this is his third feature to be shown at the festival and feels as though it is a sort of homecoming for him. “I love the audience here. It’s unique because it feels personal. I feel very supported.”

Daniel Rink, a Bend native, has a film set to screen, named Still Moon. The 16mm short was shot in Central Oregon and Colorado and follows a narrative set in the 1800s. A crew of surveyors find a recently massacred indigenious tribe with a lone sole survivor and a survivor tale ensues, something that resonates with the rugged wild west history of Central Oregon.
Supporting emerging talent is just what BendFilm does best. “We’ve made a conservative effort to bring not only notable filmmakers that we all admire, but to showcase new talent,” says BendFilm Director Todd Looby.

This can be partly attributed to the festival’s growing nationwide reputation which accounts for more talented directors submitting their features. It can also be traced to BendFilm’s commitment to improving the quality of the program.

This year, the Festival will host its inaugural First Features showcase, a program which screens the first films of renowned independent filmmakers. John Sayles who has directed a colorful catalogue of films such as Eight Men Out, City of Hope, Matewan, Lonestar and Passion Fish, will present his directorial debut, The Return of the Secaucus Seven, released in 1979 and starring Maggie Renzi, a long-time creative collaborator. Both Sayles and Renzi will be in attendance and will speak about the changing landscape of independent film.

“He’s the perfect person to launch First Features,” says Looby, who attributes Sayles as a personal hero. “John has seen the evolution of film and was one of the first to push back against big studios taking creative control. Instead of being firmly disillusioned with the system, he decided to take matters into his own hands and was one of the first to finance his own films. Nowadays this is more common but he was the one who jump started it. He’s a pioneering spirit and exactly who BendFilm wants to showcase and collaborate with.”

The festival supports the future filmmakers of tomorrow with a program set up for fifth to twelve graders who are able to show their short films to BendFilm filmmakers and jurors, who then give constructive criticism. “Mentoring more kids in the craft is paramount to growing the film industry here,” Looby states. “As well as growing the year-round program and improving its selections.”

Facilitating a love of film is what those involved in the festival want to ultimately curate in Central Oregon. Attending the festival is but one way to foster that growth year in and year out.
Perhaps Jambor sums it up the best when he says, “Film is one of those art forms that includes all of the other crafts. It features acting, music, dance, for example, all rolled into one. It’s simply the best storytelling tool.”

Take part in the storytelling with the BendFilm Festival from October 6-9.
Full film listings at www.bendfilm.org

See the online version of Cascade A&E online at: