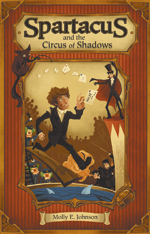 Ever consider tossing it all away to join the circus?   Imaginative Portl author Molly Johnson knows just how you feel.  Her darkly comic adventure book, Spartacus the Circus of Shadows was published by Portl ’s Raintown Press in October contains references to many Oregon l marks, including a passage set right in Sisters itself.  It’s been receiving decent reviews by independent reviews, authors bloggers Johnson is proud of getting it on paper seeing it born into the world.

“It’s really amazing to see it in its physical form, something you never expect to see happen,” she said from her home in Portl .  “This is kinda like I’ve sent my child off to pre-school.  I can’t write in it any more–I can only Facebook Tweet about how it’s doing. Well, promote it in schools bookstores.”

Writing sports articles for her hometown Nugget newspaper in Sisters over ten years ago,  Johnson never would have guessed her future path as a budding children’s novelist. Johnson graduated from Sisters High School in 2000 continued developing her craft as a wordsmith in witty restaurant, movie art gallery reviews for Linfield College in McMinnville.

Spartacus Z er is a loveable outcast in search of his mother, who has run away to join the circus to become The Amazing Athena, World-Famous Human Cannonball.   On a quest to locate his missing mother, he meets trusts a host of colorful characters who challenge his will put him in dangerous situations, all in an odd odyssey to bring her home.  It’s a crazed road trip, coming-of-age tale with touches of the fantastic the funny.

Johnson needed something for graduate school at Portl State she continued to develop “Spartacus” for the next two years finished it in 2006.

“They have a lot of great programs I met so many amazing people who helped me stay dedicated committed to the project through their student-run publishing program,” she said.  “After I graduated I submitted it to many publishers was rejected but one of my professors contacted me asked if they could use my manuscript in her book editing class.  Because of that, a student in the class who went on to start Raintown Press, Cory Freeman, remembered the story wanted it for their first book.”

The initial press run of “Spartacus” is limited to 1500 copies, 750 softcover 750 hardback.  It’s also available for Kindle on Amazon.com.  Johnson’s writing schedule involved a lot of rewrites on plotting revolving around ridiculous deadlines.  The whimsical drawings used to illustrate the book were done by Robin Kaplan, an artist into steampunk style fantasy realms.

Beside promotions for the book, Johnson is working on her next book is plotting it out before diving back into the writing process.

“The blank page is not going to write itself.  You have to sit down actually write to be a writer that’s the hardest part,” she said.  “It’s so lonely but so rewarding too.  It’s like having homework for the rest of your life.”

Info: www.raintownpress.com or for a signed copy of the book go to www.mollyejohnson.com.